A few months ago, my husband and I started talking about renovating certain parts of the house. Namely the unfinished and roomy attic space. We discussed turning it into a game room, a television room, our new master bedroom (which would then mean we needed to install a second bathroom), or my own office space. Two things came from this brainstorming session:

But then all this talk about actually having my own office space got me thinking about actually having my own office space! While that wasn’t necessarily in the plans to begin with, it has been an ongoing issue in our house. Matt and I have tried sharing the front room with each one of us sitting at desks facing an opposite wall. That worked for him just fine (he’s way more easygoing than I am about most things in general), but I don’t like writing unless I’m alone and the noises from his video games are sometimes very distracting. Then we thought moving me into the bedroom would be a good solution. The newness of that wore off quickly once I realized I had to turn on the white-noise machine to drown out the aforementioned video game noises that traveled easily down the hall. Also, constantly get up to let a dog in or out, or having Elle walk through to get to the kitchen (it’s a two-door room and a closer route).

That kind of isolation can make a person nutty. Even me, and I’m the kind of person who really thrives on isolation. Geez, introvert too much? I got really sick of my bedroom.

I told Matt, rather emotionally, that we needed to find a fix. Either we had to buy a new house with a separate room for me or we’d get that ridiculously unaffordable attic office space. I wasn’t even close to joking around.

We agreed on something else instead. It comes to about 1/16th the cost of a basic attic renovation and 1/40th the cost of a new house – one that probably had a crappy lot size, anyway. What did we agree on? A backyard cabin. A she-shed, a writer’s studio, an artist’s loft, a whatever-you-want-to-call-it. A 12×12, 244 square foot space that is mine, a place where I will have the quiet I need to study, to research, to write, to decompress. No dogs, no noise, no interruptions.

A week ago we drove down to Blanchard and put in our order. The construction company is building the cabin this week and we expect it to be delivered sometime over the next two weeks. After that we still have to deal with insulation and drywall, flooring installation, electric and a small heating/air conditioning unit. Then there’s painting and decorating and lighting and landscaping and porch furniture. Porch furniture? Yes, my cabin has a 12×4 porch! Which is where the dogs will hang out, because I’ll be damned if I have to lug a vacuum cleaner from the house to the cabin just to vacuum up even more dog hair.

Up to this point we’ve prepped the cabin site as best we can. There’s really not much more to do except wait for the structure to be placed. So here is a photographic journal of sorts of what we have managed to get done thus far – and by we I mean mostly Matt and his friends, because by the third shovelful of dirt I had thrown out my back, then I went under for an unrelated minor surgery and was out of commission for about 4 weeks. When it comes to physical labor I’m totally useless. But I can pick out paint and flooring, no problem! 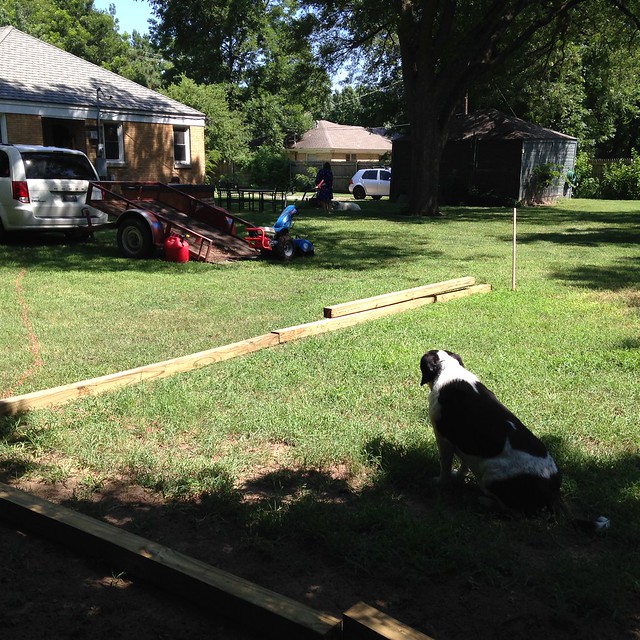 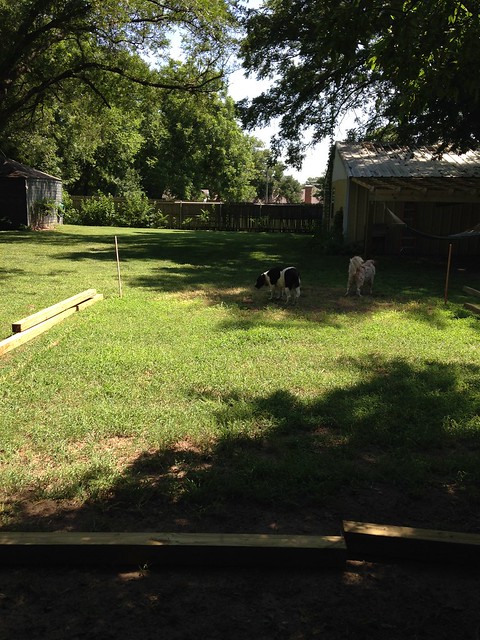 Ted and Abbey, just two of our mutts soaking up the view from their soon-to-be porch. 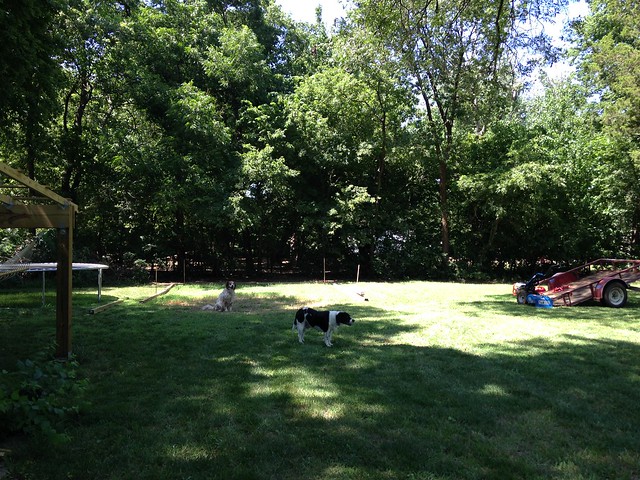 Getting ready to till the ground 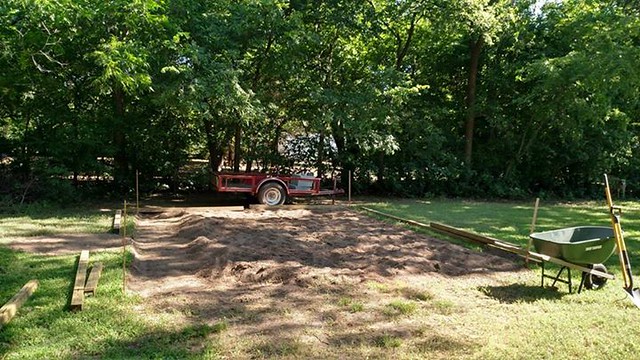 Two weekends worth of dirt for my husband, or How I Threw Out My Back 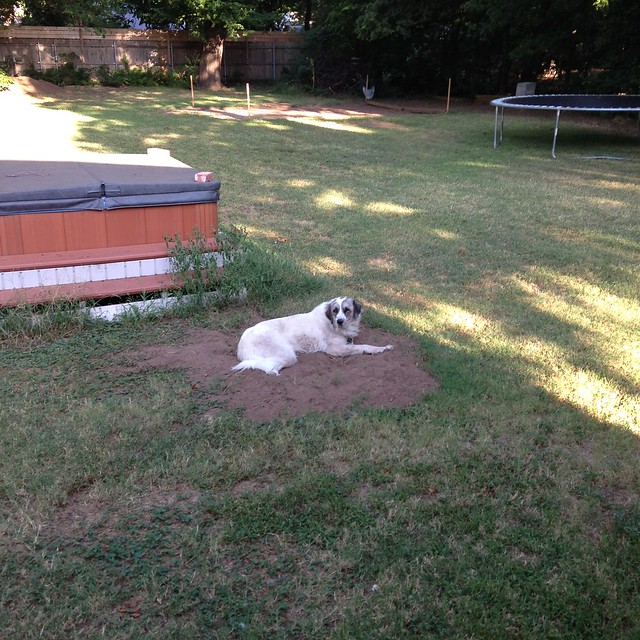 We filled in the uneven spots in our yard in the hopes that grass would grow and give them a nice cover. Ari didn’t approve of that idea, but she did approve of more dirt holes. This dog loves lying in dirt holes. 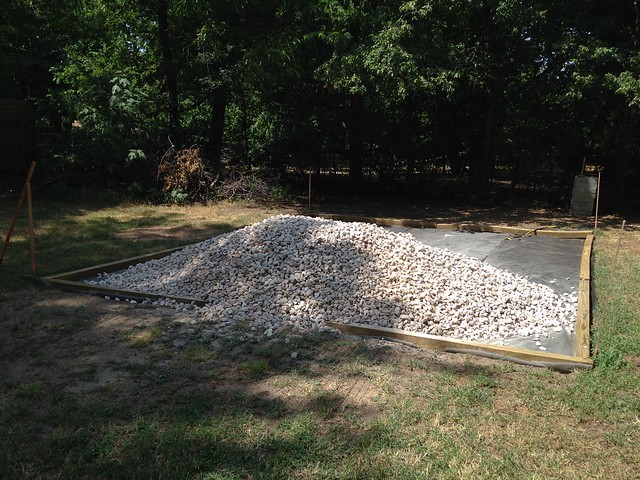 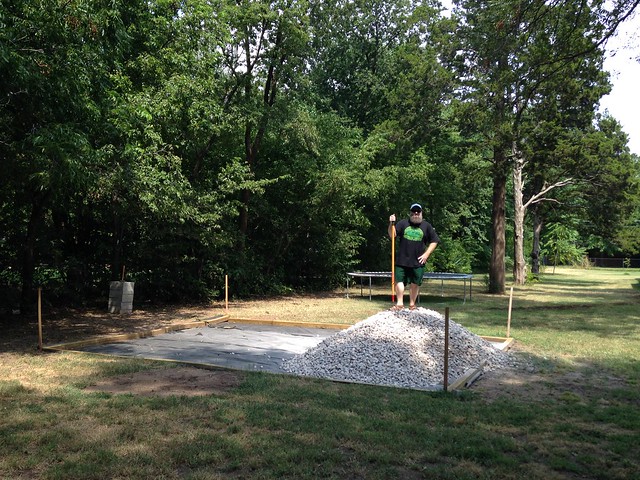 Hahaha, a shovel. To move all that rock. Ain’t happening, but let me introduce you to my optimistic husband with a can-do attitude. 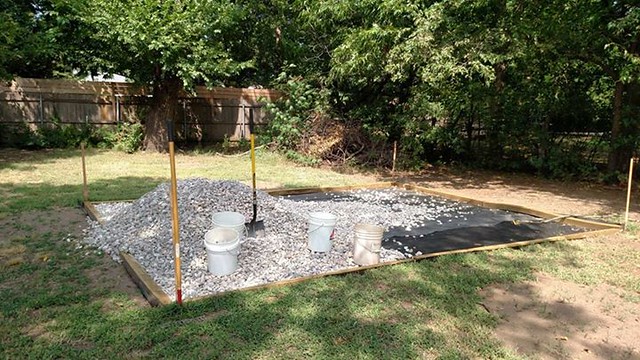 Shovels, buckets, bare hands, and feet. That’s how we moved it. And since I am afraid of shovels (I have an old lady back), I used my bare hands. Totally works. 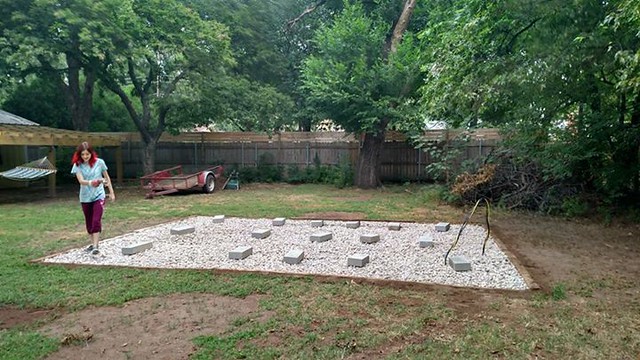 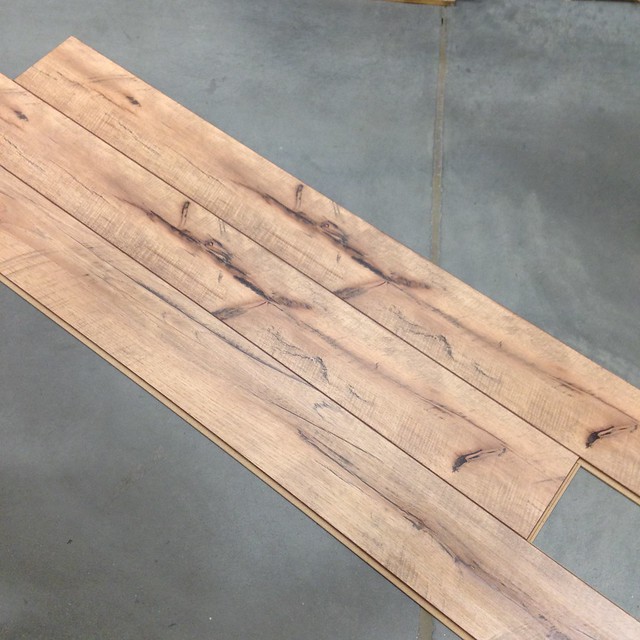 My flooring selection. I had to think about seasons and coziness and how I go absolutely batshit crazy in the winter when everything is gray. I chose this because it has hints of orange and hints of gray – the cool and the warm, the yin and yang? And it was on SUPER MAJOR sale, which is always a plus.

PS. Does anyone know how to rid my Flickr photos of that embed link?