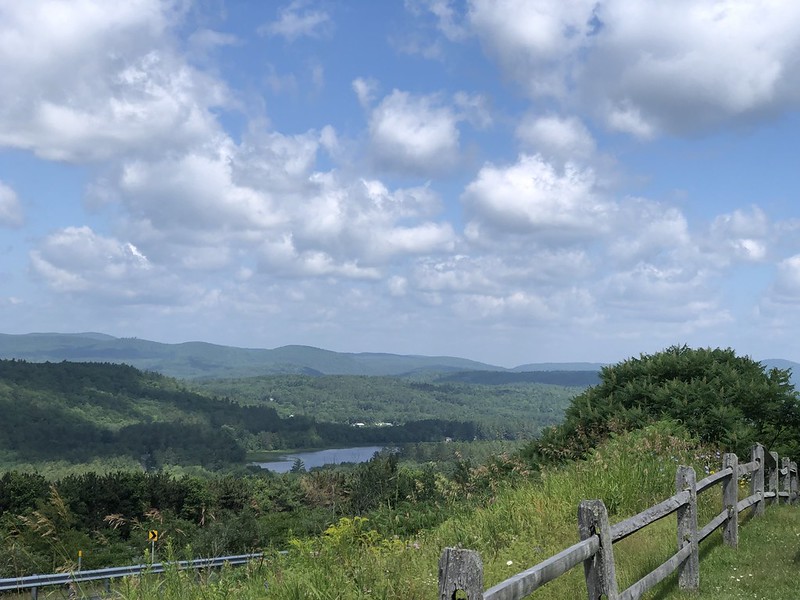 It really could not have been a more perfect day when we set out on the road for the drive north to Quechee, Vermont. Over the year we’ve lived here, we have discussed heading up that way to visit the Ben & Jerry’s headquarters or the Cabot Creamery. Coordinating our schedules and figuring out dogsitters proved a little difficult. My husband has a second job. I work nights and sometimes weekends. Do we leave the kid at home? And that’s kind of unfair to her, right? Luckily, someone told us about a smaller Cabot Creamery Store in an old antique mall located just across the state line. When I mapped it out, I noticed the creamery is only a short drive from an old, famous bookshop I have always wanted to visit, which is only a short drive from a brewery my husband has always wanted to try.

We made a day of it. Our Cheese Quest turned into a Bookstore Quest, a Brewery Quest, and a Llama Quest (how often do you get to participate in one of those?). That we happened upon the deepest gorge in Vermont was simply a delightful surprise. The kind of surprise that makes road trips like this one so much fun.

Our first stop took us past Quechee to a small town called Woodstock, home to the Yankee Bookshop. This quaint little store has been in business since 1935 and serves as the oldest continuously operating bookshop in Vermont. I’ve been on a kick lately to visit all the New England bookstores I’d heard about when I was a non-resident. It’s a worthy goal: shop local, go home with a book. It’s a win/win if you ask me. 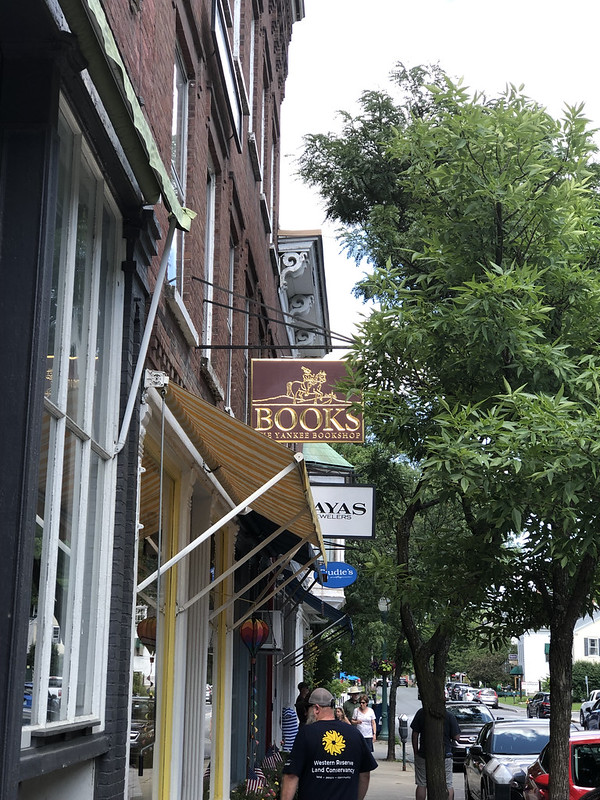 Next we were off to Long Trail Brewing Company. We drank good beer, ate mediocre food, and waded in the adjacent river that has such a difficult name for me to remember that I often have to Google it (the Ottauquechee River!). Here is where we also met up with our friend, Rob. Rob went to school with my husband and me back in the early 1990s in Prince George’s County, Maryland. Rob and I didn’t speak much in high school. Matt and Rob never spoke at all. Yet we each acknowledge how our hellish high school experiences have bonded us for the long haul (one day I may expand on the trauma of our high school years). And here we are, visiting each other as often as we can. When we first moved to New Hampshire last summer, Rob was our first overnight guest! We hadn’t seen each other in nearly 25 years but stayed up into the early morning hours catching up. There is much to be said for shared experiences, good and bad, that make the unlikeliest of friends. 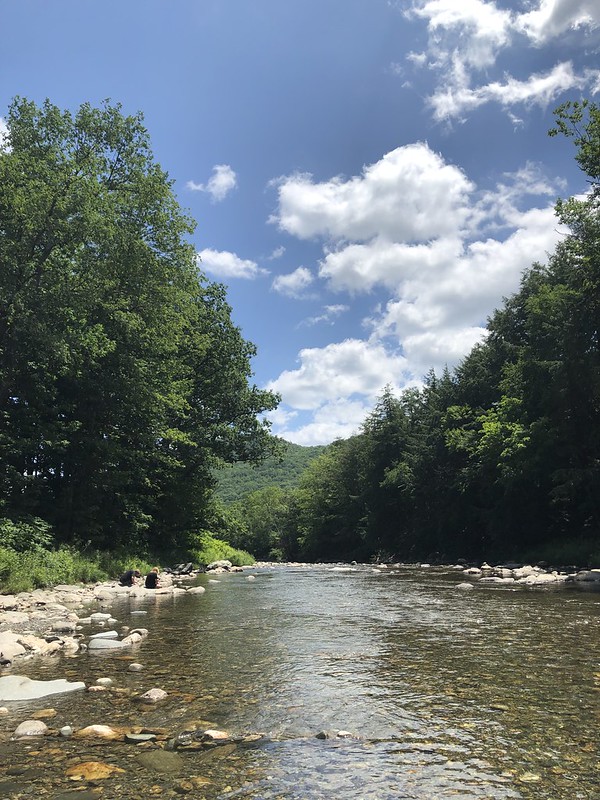 After lunch at the brewery, we said our goodbyes to Rob and headed back toward Quechee and the New Hampshire border. But I wanted to make a quick stop near a bridge we’d crossed that traveled directly over the deepest gorge I’ve seen east of the Mississippi. It’s 165 feet deep and spans over that river I can never remember the name of unless I Google it (the Ottauquechee River!). It turns out it’s part of Quechee State Park, but there are parking areas available off the highway. From there visitors can walk across the gorge on Route 4 via pedestrian bridge. There is protective fencing, no doubt erected to prevent attempts at suicide, but the view across the gorge is incredible. One can even see, if facing north, a small sandy beach where visitors have hiked into. It was very brief stop but enough to satiate my want of more nature touristing. 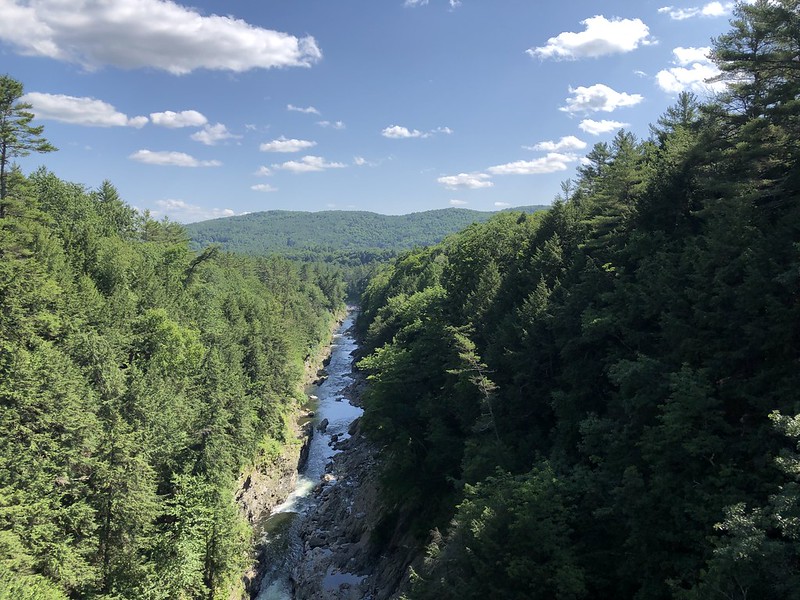 That someone who originally told me about the Cabot Creamery Shop had also supplied me with cash and her personal cheese shopping list (it was the least we could do since she’s the one who pointed us in the right direction). It was like Cheese Mecca, you guys. DO YOU KNOW HOW MANY CHEESE SAMPLES A HUMAN CAN SAMPLE BEFORE THEY JUST BECOME SICK FROM ALL THE CHEESE SAMPLING? I nearly crossed that line on my second trip around the sample table. There are cheddar samples (do you know how many varieties of Cabot cheddars there are? NO YOU DO NOT. Trust me.), a bazillion and a half other hard cheese samples, spreadable cheese samples, and mustards. Yes, MUSTARDS. With crackers and pretzels. It’s like lunch. Go hungry. Leave happy. Or sick. Happily sick.

I can’t remember how much money we actually spent but I do remember we had to do math. Like If we buy all this cheese will we have enough money to pay the mortgage? kind of math. And yes, we did buy all this cheese. We’re still eating it – two months later. We bought it all because there are varieties in the Cabot Creamery shop that are not sold in the grocery store. And because I SAMPLED MYSELF TO NEAR DEATH so I knew all the cheeses I wanted. I literally kept a rating scorecard on my iPhone, calculated the results of each, and proceeded from there. The winners: Orne Cheddar, Vintage Cheddar, and the spreadable Port Wine. Also, Cabot cheddars are lactose free so KNOCK YOURSELVES OUT, lactose sickos. You’ll be fine.

And finally, Llama Quest! Elle often suffers from Cabin Fever like her mother, and often begs to go somewhere. She joined us on this road trip simply because I promised there would be llamas (strangely, she wasn’t impressed with the promise of cheese). AND THERE WERE LLAMAS. We didn’t get a chance to spend a lot of time with them, but Elle’s goal for the day was to pet a llama. And we made that happen because WE ARE NICE PARENTS. 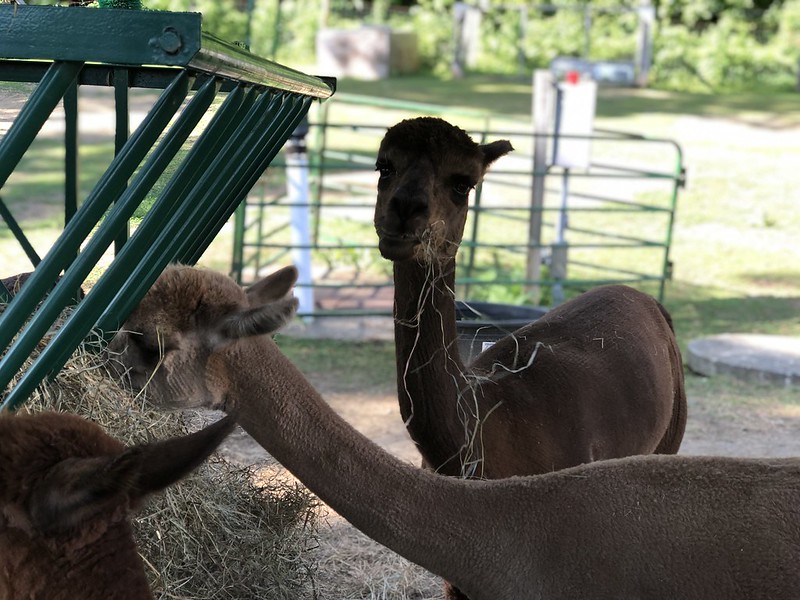 The first time I traveled through Vermont was to come to New Hampshire on a house hunt. The second time I traveled through Vermont was to permanently move to New Hampshire after said house hunt. I hated it both times. Southern Vermont has a lot of closed in spaces. Too many trees blinding the view, the sky, the oncoming traffic around all those sharp curves. But this Vermont was a different Vermont. Of course there were mountains and trees and lots of oncoming traffic. There were also vistas, and open spaces, and views of the sky. It was simply beautiful. Vermont and I are friends now.