There is a ridiculous amount of well-marked history in this region of the country. In fact, I’m almost certain that any patch of grass or pavement on which I stand has played a crucial role in something: An historic railroad junction; the deathplace of a notable townsman; a natural disaster with a terrible story that remains only in the buried memories of a bunch of dead people. This place is teeming with it all. Teeming, I tell you!

So I guess I shouldn’t have been surprised at all when I happened upon a small town in the southern foothills of the White Mountains, stopped to have a small bowl of graham cracker ice cream (it exists, and it’s delicious), and unexpectedly discovered, in the tiny town commons, a memorial in honor of Nathaniel Hawthorne. 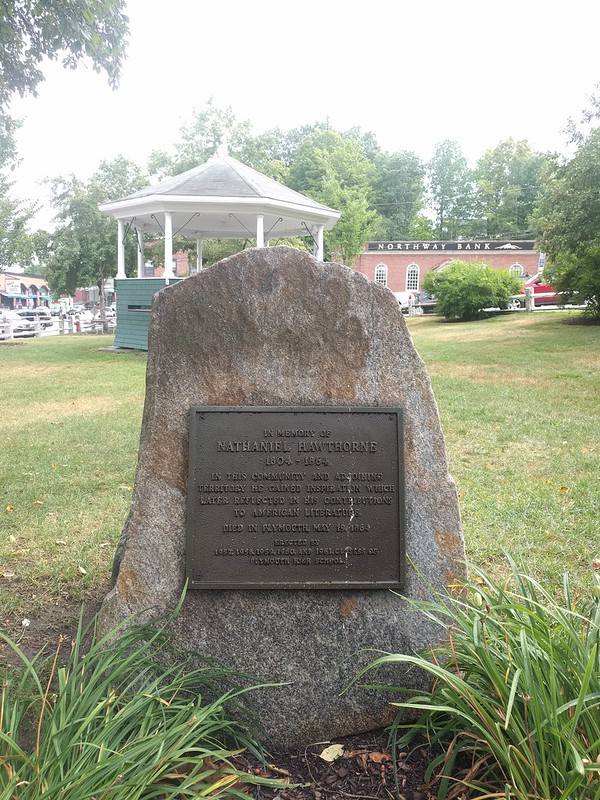 I will admit I have never read a single novel by Hawthorne. The only thing I actually knew about him, up to that point, was that he wrote The Scarlet Letter (a novel my friend, Katy, absolutely loathes), and that he was so ashamed of his family’s connection to the Salem Witch Trials that he changed the spelling of his last name so he would likely never be associated with them.

But what’s his association with Plymouth, New Hampshire?

It turns out that Hawthorne and President Franklin Pierce, a native New Hampshirite, were BFFs. Like, for a really long time, going back to their college years. Pierce had invited Hawthorne to travel to Plymouth where they both hoped the crisp, mountain air would alleviate Hawthorne’s many ailments. It didn’t, and Hawthorne died in his sleep on May 19, 1864. Pierce discovered his body just hours later. And while this was likely a somewhat traumatizing moment for Pierce, who had endured great loss in his life, it may have been exactly how Hawthorne hoped to die. The New York Herald wrote, ““It is a singular and happy circumstance that friends who have lived so many years upon terms of unrestricted intimacy as Franklin Pierce and Nathaniel Hawthorne should in the final hours of one still be so near to the other as to enable the survivor to hear, as it were, the last whisper of his friend as he entered the portals of eternity.”

And so, the town of Plymouth perhaps endears itself to fans of literary tourism by memorializing Hawthorne’s unexpected passing in a hotel that used to exist just across the street from this park. And I have no problem with that. Hawthorne probably wouldn’t have a problem with it, either. It seems that he, too, was a fan of trauma tourism and, because of his work, he even introduced the concept to those who vacationed to New England in the 19th century.

In 1835, Hawthorne wrote and published a short story called “The Ambitious Guest.” It was based on the freak deaths of seven members of the Willey family and two others who died in an avalanche of rockfall the occurred on August 28, 1826. The area in which the disaster occurred experienced a boom in tourism shortly after the Willey family’s story got around. The Willey family had fled to what they believed was a safe house, which ended up being buried in the rockslide. The Willey house itself sustained no damage at all. Artists of all kinds flocked to Willey Mountain in the area of Crawford Notch. Painters Thomas Cole and John Frederick Kensett, along with Hawthorne, are often credited with either promoting the beauty and history of Willey Mountain, or just flat out exploiting the deaths of an entire family through their chosen art forms.

The title character in “The Ambitious Guest” has no name. He is simply a stranger whose arrival brings to the family a sense of excitement, a newfound desire to live a more meaningful life than the sleepy one they have chosen on the mountainside. They share with each other what they wish to have engraved on their tombstones, to tell others how they lived their lives. The children in the group joyfully announce all that they will accomplish before their deaths, now that they’ve been encouraged by this ambitious guest of theirs. The stranger, who refers to himself as “a nameless youth” declares, “But I cannot die till I have achieved my destiny. Then, let Death come! I shall have built my monument!”

Moments later, he ponders, “I wonder how mariners feel when the ship is sinking, and they, unknown and undistinguished, are to be buried together in the ocean–that wide and nameless sepulchre?” Suddenly, a rumbling from outside begins to sound and the family, with their guest, flees to their safe house. An avalanche of rockfall crushes them all. They are never found. They are buried together in the ocean of rock and debris–that wide and nameless sepulchre.

That kind of anonymity does not apply to Nathaniel Hawthorne obviously. He died in Plymouth, and by god, they’re going to announce it to everyone with this monument. There is a statue of him in Salem, Massachusetts, the place where was born but never felt like he belonged. And his grave site is located in Concord, Massachusetts, where he shares cemetery real estate with the likes of Ralph Waldo Emerson, Louisa May Alcott, and Henry David Thoreau. They were his equals. They were his friends. They were also his pallbearers. But Hawthorne, according to Emerson, suffered from his own loneliness. It is believed by some that his solitude and suffering are what ultimately killed him (it is now known that he died of stomach cancer). In death, Hawthorne is revered and celebrated. But in life, Hawthorne may have endured an existence aboard what his own creation, the nameless youth, called a sinking ship.

“I shall have built my monument!” This is what the stranger wanted, yet, could this really be what Hawthorne wanted? I don’t believe Plymouth is exploiting Hawthorne’s death at all. The monument is merely a desire to be a part of the Hawthorne narrative. Plymouth inspired Hawthorne and welcomed him whenever he came through. The town was clearly one facet of his life that helped keep his ship from sinking even sooner.