On New Year’s Day of this year, I set my Goodreads challenge to 40 books. This seems to be my standard goal. I try and account for busyness, which would average me out for 1 to 2 books a week, depending on how many pages I’m up against. I include in this mix all of my academic textbooks, too. Considering they are the reason why I don’t read more books of my own choosing, I’m counting those, even if it’s just because of interference.

This year I surpassed my reading goal (51 books!) and, quite honestly, I was surprised. I took four months away from graduate school, in part to recover from the emotional exhaustion of back-to-back-to-back courses in Russian history/the Third Reich/African-American history. With four months of freedom from multiple academic history books, I thought I’d fall short. And I had less free time than I thought I would since we spent all it preparing for a move we didn’t even know we’d have to make – and then we made the move. Sitting down for an hour with a book became a luxury.

Here’s a look at my favorite books I read in 2016. You may notice a theme in both genres. Nonfiction favorites are, of course, filled with misery and tragedy and trauma and WHAT DO YOU EXPECT FROM ME? but you should pick up on the fact that one is not like the others. And my fiction favorites were all written by a diverse group of women. This was a happy accident. 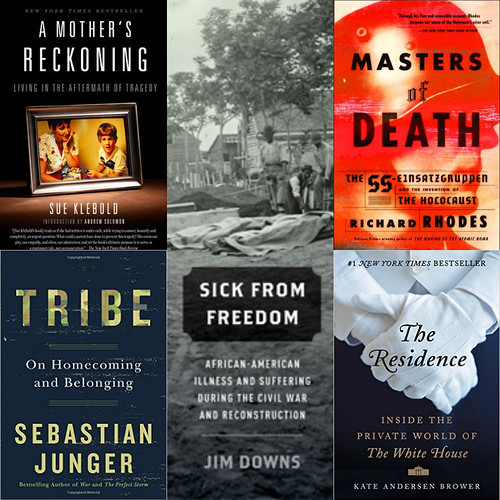 A Mother’s Reckoning by Sue Klebold: As soon as I heard Sue Klebold had published a book, I knew right away I wanted to read it. Often we forget that there is a family behind the shooter. We also forget that their lives continue amidst the death threats, the grief, the guilt, the questions. Anyone who is a parent knows that raising kids is a crapshoot. I live near a town that was the site of a mass school shooting in 2012. Just recently, the state of Ohio proposed new hearings for violent young offenders and this law, had it passed (which it did not), would have affected the life sentence imposed on this young, troubled teen who shot five people, killing three students. I don’t know where this shooter’s family lives now, and I don’t know how they’ve been supported throughout their own ordeal. Klebold’s book poses a question many of us have often wondered ourselves: When one family’s tragedy becomes the entire country’s tragedy, who is or is not allowed to mourn?

Tribe: On Homecoming and Belonging by Sebastian Junger: This was in no way written with the same dramatics as The Perfect Storm, and I think that was Junger’s intention. The information in here is dramatic enough. I was originally drawn to this book because of my own sense of geographic misplacement, but also because PTSD is, sadly, more prevalent than we as a society seem ready to accept. Most countries in Europe have been tackling the issue of trauma for decades. As usual, the United States is behind and, as usual, nobody knows how to deal with it.

Sick from Freedom by Jim Downs: This should be required reading for all high school history students. Emancipation was just the beginning of a very long road to freedom for African-Americans. However, emancipation and the subsequent humanitarian failures during Reconstruction led to the worst biological disaster in American history. What does that mean? Death, disease, and suffering. It affected mostly freed blacks who no longer had access to healthcare and proper nutrition once they’d fled the plantations and fields and the care of their masters. Disease was rampant throughout the country. Uncontrollable outbreaks traveled with the freed men and women as they made their way to large cities in search of work and shelter. The War Department, having been tasked with funding both Reconstruction and the newly created Freedmen’s Bureau, failed the newly freed slaves by giving most of its budget to Reconstruction projects.

Masters of Death by Richard Rhodes: The Einsatzgruppen isn’t often talked about in the grand scheme of Nazi Germany. However, once you start digging into the details of Nazi atrocities you can’t avoid learning more about the them, probably more than you bargained for. Comprised of three groups (officially referred to as A, B, and C), they terrorized villages all across Europe one by one. Known as the Nazi Death Squad, they encouraged villagers to turn against one another within days, which led to mass killings and even parades celebrating the deaths of tens of thousands of these villagers’ former neighbors. The Einsatzgruppen’s sole job was not to fight, but to kill. Although a few death squad soldiers had what could be called a conscience, and they would press villagers to do their killing for them. This is one reason why European countries have been successfully dealing with trauma and PTSD. It’s in their history. Everyone suffered in 20th century Europe.

The Residence by Kate Andrews Brower: What’s this? A feel-good book? YES! Well, kind of. I was not aware that the White House staff remained intact even as the president’s administrative team was constantly restructured. This book led to a few a-ha! moments, because I was reading it (voluntarily) in tandem with my required readings for my American political history course. Was Lyndon Johnson a horrible president? No. Was he a jackass? ABSOLUTELY. Did this seep into his presidential abilities? No question. It’s the little things in this book that make sense of some of the big things. Johnson had an obsession with his shower’s water pressure. It might have been one of the few things he felt he had control over. Hillary Clinton once removed the kitchen staff so she could personally make Chelsea scrambled eggs while she recovered from a stomach virus. Sometimes being a mother comes first. 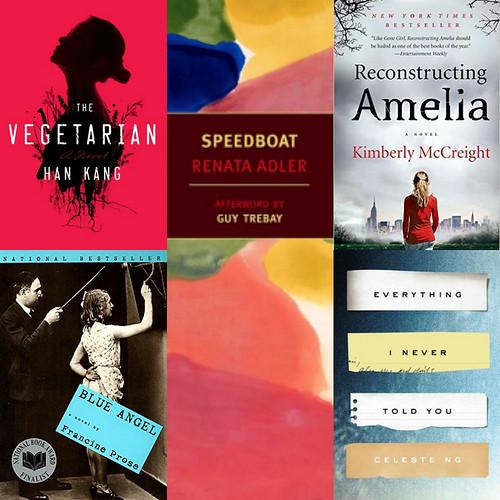 The Vegetarian by Han Kang: There is no way to accurately describe this book. The main character, Yeong-hye, is convinced that the only way to save herself from seeing the gory, bloody images in her mind is stop eating meat, start eating plants, become a plant. Her relationships with herself, her husband, her child, with everyone, begin to change so dramatically that you realize you are reading about someone’s uncontrollable fall into the depths of mental illness. I was conflicted through most of this novel. Part of me wished, as her family did, that she could just find her way back to herself. The other part of me wished everyone would let her be. It was almost like her mental illness was her way to finding inner peace. The scene in which Yeong-hye is being force-fed meat is traumatic. With writing like that, Kang’s debut has made me look forward to every word she writes from now on.

Blue Angel by Francine Prose: Blue Angel was one of the first books I read after we started to settle in our new home. I couldn’t wait to get back to it every night! It’s a story about the inevitability of getting older, of reevaluating your life and accomplishments. It’s also a story about being young and mapping out your life and future accomplishments. The reputation that followed this book in reviews made me feel like there would be a lot of inappropriate meetings of the two, of the young and the old, but the scene in question is brief and hardly graphic. What follows, however, is how such a lapse in judgment can alter the lives of all involved, directly or indirectly. Manipulation runs thick on both sides, proving that older doesn’t necessarily mean wiser, and that self worth is a thing we all struggle to determine. Some for our entire lives.

Speedboat by Renata Adler: I chose to read this book on two points alone. First, the cover. I totally judge a book by its cover (have you seen the cover of Emily Ruskovich’s Idaho or Heidi Julavits‘ The Folded Clock? For real, click on those links!). Second, a textile artist I follow on Instagram recommended it. I really like her art so I was certain I’d like her book recommendation. I was right! How does one explain the premise of Speedboat? There really isn’t one, but there is. The main character, Jen, doesn’t exactly tell you anything about herself, or about anyone or anything. Everything you learn is from the bits and pieces she shares in an almost diary-like order. Her life is so uninteresting to her, yet it was so interesting to me. I couldn’t put it down.

Everything I Never Told You by Celeste Ng: How many time can we survive heartbreak? (Numerous times, actually, as evidenced by my own ability to survive 4 out of 5 of my nonfiction picks, and both this novel and McCreight’s.) I’m not giving anything away when I tell you the daughter dies. That’s what this entire novel is about – the daughter’s death, the family’s (in)ability to recover, and how each of them respond to what is now required of them to help each other. Throughout the book, I couldn’t help but imagine this was my own daughter. My one and only child. Gaaaawwwddd!!! Ng just kept breaking my heart, over and over and over again. And the story’s ending? Kablooey. You’ve been warned.

Reconstructing Amelia by Kimberly McCreight: I had apparently not learned my lesson when I read Celeste Ng’s novel about the sudden, unexplained deaths of teenage daughters. McCreight’s novel explores the relationship between a single working mother and her only child. So how well do we know our kids? Even though Amelia’s shocking death is ruled a suicide, her mother is unconvinced. What follows is her heartbreaking discovery of what Amelia’s life was really like in the months leading up to her death. Did she jump from the roof of her NYC school? Or was she pushed? McCreight’s character development is enough to leave you suspicious of everyone, but I was left with questions. Was this intentional? Am I supposed to just accept what I know, just as Amelia’s mother had to? Maybe. And while that’s disturbing, it doesn’t take away from the novel at all. Do we ever know all the details, about anything?

And there you have it!

Anyway, I’m currently working my way through This is Where You Belong by Melody Warnick. What about you? Tell me, what are some of your favorite reads of 2016? And what are you reading now?