The night before we left for our most recent house hunting trip to Cleveland, one of Oklahoma’s infamous midnight thunderstorms barreled through the city. The lightning was unforgiving. The thunder was relentless. So for three hours I comforted a terrified Great Pyrenees who was shaking from head to tail. I doled out a ridiculous amount of cuddles, pets, and calmly spoken reassurances. We moved from room to room as Ari searched for the safest area of the house in which to panic, spending most of our time in the bathroom. A hyperventilating Pyrenees is no fun. Nobody slept except the other dogs, although Matt caught a few hours. But since I wasn’t the driver, I very much looked forward to sleeping in the car.

Be careful what you wish for.

The usual 17-hour drive was stretched out to 23 hours. We nearly ran out of gas in rural Oklahoma and then passed up the last hotel to be had in western Ohio. So we headed to Dayton. Sold out. We then headed to Springfield, nestled between Dayton and Columbus. Sold out. Finally we decided to shoot for Columbus. It was nearly midnight and every room in this city was also sold out. It was the weekend before the Republican National Convention, yet I cannot blame the Republicans for this. It was just a busy weekend of family reunions, weddings, and softball tournaments. But I wanted to prove to my husband that I am adventurous, flexible, go-with-the-flow-ish (!!!!!!), so I agreed to pull into a rest stop north of Columbus and sleep in the car. We were both exhausted, but Matt was barely functioning in a kind of catatonic-autopilot state of existence. There were no options.

So we flipped the backseat down, whipped out the sleeping bags, and opened up the moonroof. I brushed my teeth in a public interstate bathroom and tried to fall asleep to the soothing sounds of 18-wheelers entering the highway from our rest stop ramp all while staying poorly cocooned inside my sleeping bag. We were two hours away from our final destination. Two hours! Mere minutes (considering that day’s mileage) from the Cleveland suburbs! This was a fact I could not ignore. Believing that a comfortable bed might be within driving distance kept me awake, cursing our bad luck. That being the lack of sleep from the previous night, the close call with running out of gas, the nonexistence of a vacant hotel room in all of Ohio, so far. We had to push through! We needed to root for ourselves! We needed a comeback! Could Cleveland be our Believeland, too?

At 3am, I woke up my husband and pretty much demanded we come up with a better solution. (I guess this means I am not only NOT adventurous, flexible, or go–with-the-flow-ish at all, but I’m also very rude.) We had a meeting scheduled with our realtor at noon; our entire afternoon would be packed with touring homes and driving from one house to another. We needed sleep. REAL SLEEP. Even if it was just a glorified hours-long nap. I called the hotel we were scheduled to check into the following night and explained our situation. The auditor was happy to get us into our room a day early. He was even happier to charge us for a full night even though we didn’t arrive until 5:30 in the morning!

Whatever. HERE’S ALL OUR MONEY. JUST GIVE US A BED.

And we slept. Well, I slept. Matt woke up a few hours later and went to secure a storage unit, then unloaded the entire U-Haul trailer by himself. I woke up at 10:30 feeling exactly like you’d expect someone who had just spent 23 hours in the car to feel (this includes the hours spent trying to sleep in the backseat). I can’t explain how Matt felt, but he is obviously superhuman.

And that’s pretty much when things started to improve. We visited about eight homes in two days. One property smelled like the seller’s cats had peed on every square inch of the house. Another strange-smelling home was next to a trigger-happy gun enthusiast who decided that the moment we arrived to tour the house was the moment he would fire off every weapon he owned. And in quick succession! We left that place quickly.

Welcome to Northeast Ohio. HERE’S ALL OUR MONEY. JUST GIVE US A HOUSE.

Well, we got us a house. It’s a split level with a sunny, red-tiled kitchen, and it’s situated on an acre and a half of weeping pines, blue spruces, and birches. Instead of grass, we have a yard full of moss. There’s even a small creek running through the yard. And in two weeks, we leave Oklahoma for our new life in Ohio. 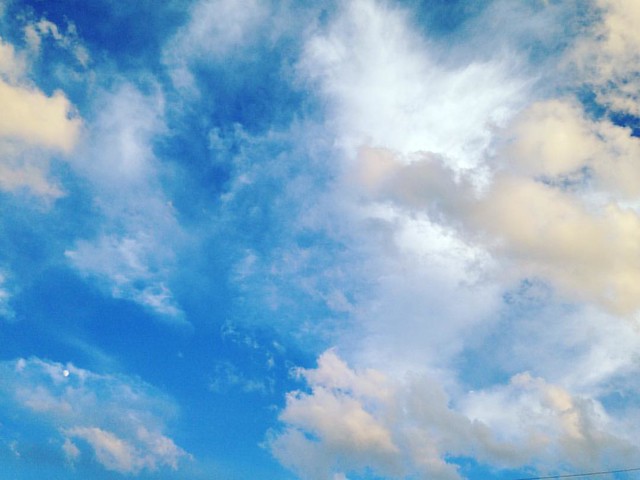 On our way to Cleveland, the moon and clouds over Indiana. 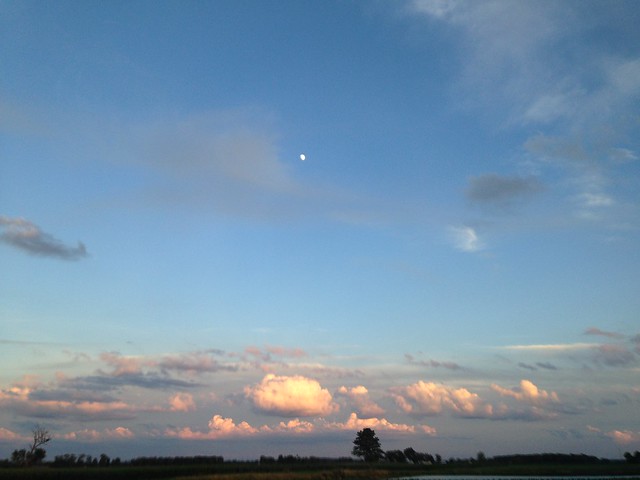 Indiana’s sunset, shortly before the fields exploded with lightning bugs. 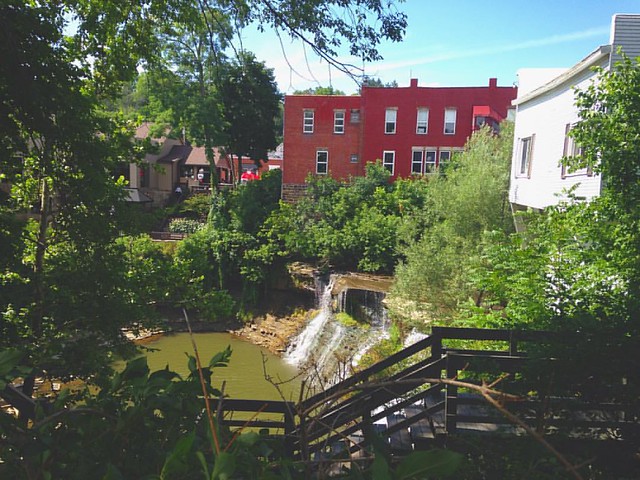 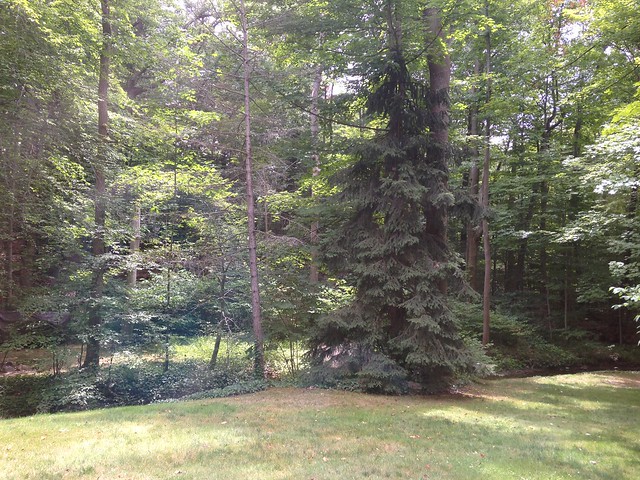 Part of our new front yard – behind that weeping pine is a creek! And if anyone knows what kind of tree that is, please share. I call it a weeping pine but I totally made that up because it looks like a sad, weeping pine. I know…how clever. 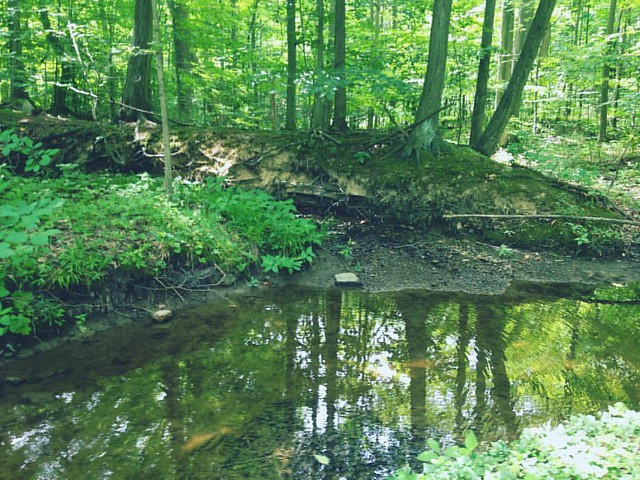 Our creek, complete with minnows and turtles and plenty of frogs. 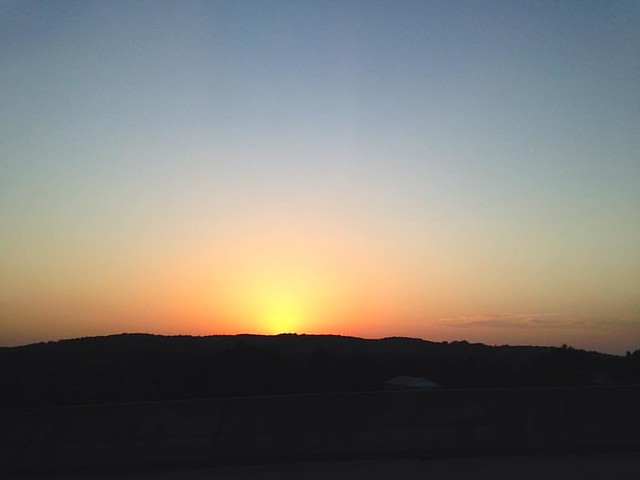 Sunset in the Ozarks on our way back to Oklahoma.

2 thoughts on “Road Trip to Cleveland”