You may remember the beautiful blue spruce we received in the mail after our return from Wisconsin. Bruce is his name. Bruce the Blue Spruce.

Bruce barely made it through the summer, even though we kept him indoors in a pot. I watered him weekly, then daily, then whenever he looked like he needed water. Like babies and dogs, I wish this little blue spruce had some way to communicate with me, to tell me whether he was thirsty or feeling waterboarded or just needing to go outside. Most days I would look at him and assume he was mostly dead. Not mostly dead in a way that Miracle Max could save him, but mostly dead in a way that it seemed pointless to keep trying to keep him alive. Like every time I watered him I was only adding on to his miserable existence. Delaying his inevitable death, if you will. The fact that I have just revived three varieties of succulents after months of them being ripped apart by asshole squirrels outside means nothing to Bruce. No matter what I do, he still looks mostly dead.

But mostly dead means, to me, that he is still kind of alive. Bruce still has some greenish pine needles on top. That means something, right?

After our weekend of snow the ground temperature cooled and Bruce could finally be planted outdoors. We picked a nice spot in line with the Eastern cedars, dug our little hole, and plunked Bruce into his new home. He’s barely a foot tall. We’ve got a few weeks left of above freezing temperatures. After that, Bruce will just have to pretend he’s back home in Wisconsin covered in snow and ice, chilled root ball and all.

I’ve grown fond of Bruce greeting me every morning when I wake up. He lived, although mostly dead, on my bedside table, but we just installed new curtains and he would’ve been in the way. It seemed a good time to send him off into the world.

Cross your fingers he makes it. 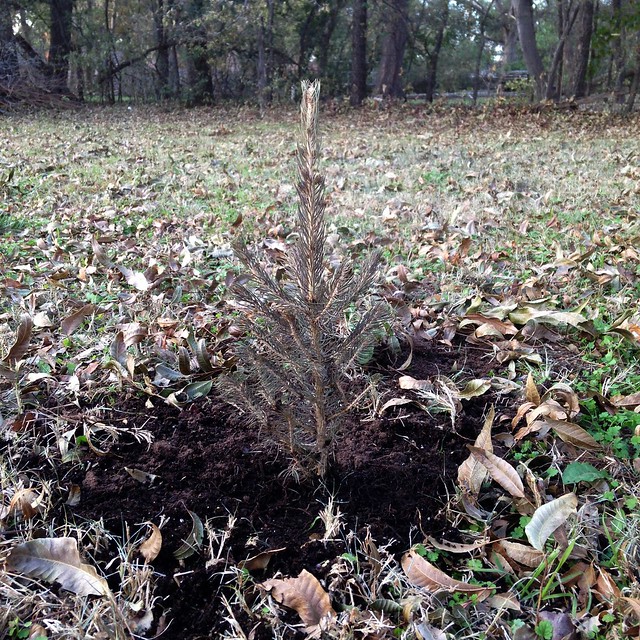