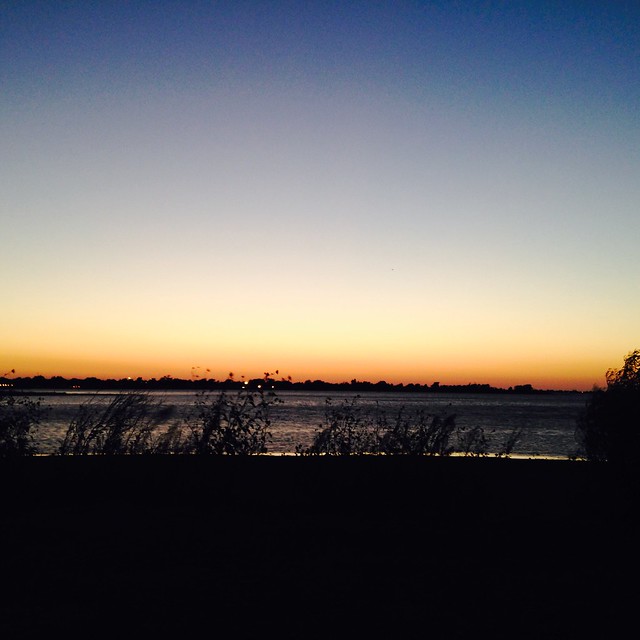 As I type this the wind is howling through the city, shaking up the trees and my metal porch rocking chairs. You can actually hear it roar before it blows through. This, I’ve learned, is typical of the southern winds that come from Texas. The photo above was captured last night just before the winds became so unbearable that Matt and I cut short our lakeside walk and headed back home. Blowing dirt in the eyes – it’s not a pleasant feeling. Being around a large body of water during sunset – that’s a pleasant feeling.

It’s a little after 6 o’clock in the morning. I woke up nearly three hours ago – on my own, on a holiday – and have already had breakfast and watched an episode of Parenthood on Netflix. The rest of the family is still in bed. The dogs did get up  to have their first meal of the day with me but even they promptly went back to sleep. I hopped online to get a head start on some classwork but, as usual, I was distracted by stories. This time is was a blog post written by a young woman who is touring the arctic waters near Greenland, where icebergs and belugas outnumber people. Another time I was sidetracked by an entire blog series about women who travel solo in Iceland.

I’m not sure when I developed this fascination of life around the Arctic Circle. I much prefer being in the subtropics. My loyalty to the North Florida swamps is proof of that. Even my current Facebook profile photo is of me riding an alligator, all giddyup style. I’m also concerned about how the manatees will fare if their federal protection status goes from endangered to threatened, which is very possible. So while my heart is in the coastal south, perhaps my sense of adventure (which is very underdeveloped) enjoys learning about life in the high Arctic because it knows I’ll never go.

So, back to why I’m online in the first place. What it’s like studying history? Well, I’m not studying history yet. I’m actually studying how to study history. Sometimes this is very boring, as there are only so many ways one can be told how to interpret a source. Also, there are way more types of sources than I ever thought possible. I’m enjoying parts of this, though. We are told to be critical and skeptical, yet to remain open and able to consider context. I am a Libra, a middle child, and have played Devil’s advocate all my life. I feel very comfortable in this role.

Clearly, there can be no perfect interpretation of history. My classmates and I have compared historical interpretation to practicing medicine or law – you’re only told so much by the source/patient/witness, then you must factor in what they are possibly not telling you, and then you are expected to create a narrative/diagnosis/judgment. In the end, someone is always going to be pissed off by what you’ve decided.

I opened the blinds hours ago so that I’d be able to catch the sunrise. I wasn’t paying attention so I totally missed it. At least the wind has stopped.