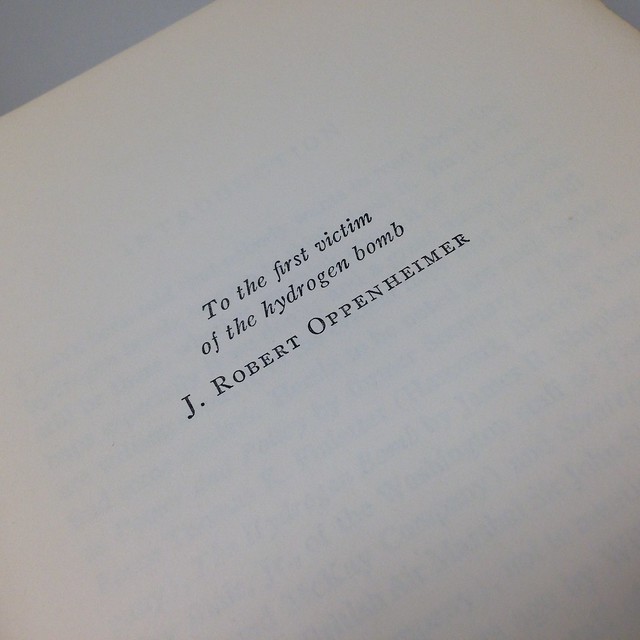 I’ll be completely honest with you: I have no idea what this means.

Each week I spend at least a couple of hours organizing the books in my museum’s library. When I come across something that interests me, I photograph it. The same day I discovered this dedication I also found the word MURDERER written neatly over a snapshot of Reinhard Heydrich’s face. Beneath that were the words NOW IN HELL FOR ETERNITY. I photographed that, too, along with the title of the book. It’s not often I find such emotional, and quite obviously personal, notes inside the books.

But with Oppenheimer I forgot to photograph the title of the book in which this dedication was found. I’m more than a little pissed at myself for that.

There are very few things I know about this, Oppenheimer OR the bomb, seeing as I’ve never watched The Manhattan Project nor do I study things that include terms like “quantum molecular theory” or “deuterium-tritium fusion bomb”. I don’t think I even associate with people who do.

So how was Oppenheimer made a victim prior to the bombing of Hiroshima? That’s what I’m trying to figure out. After some quick research I learned he was accused of being a communist, but that was nearly a decade after the bomb dropped in Japan (the Red Scare isn’t something most high schools teach kids about). Did the author of this book (boy, wouldn’t it be nice to know which book!?!?) have a personal relationship with Oppenheimer, or some other means of being privy to his private feelings? Or is this in reference to Oppenheimer being forever tied to mass death as soon as he discovered the ability to create such a weapon?

If someone knows, or even has an inkling, please share it with me.

Oh, and for any of you Nazi history enthusiasts out there: 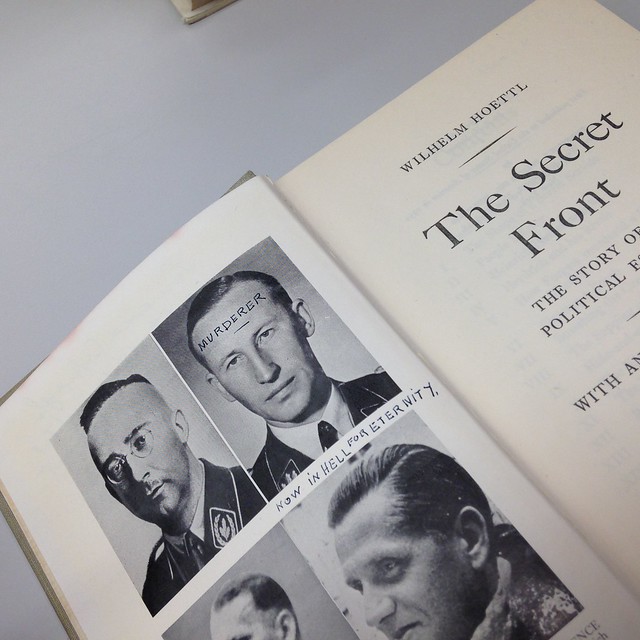 Taken from Wilhelm Hoettl’s The Secret Front, published in 1953. Hoettl was a prominent prosecution witness during the Nuremberg Trials, a valuable asset indeed after all his years serving as Adolf Eichmann’s right-hand man. And Heydrich, who I’d never even heard of before I came across this picture, seems to come up in all my research as the man who thought up the “Final Solution”. Heinrich Himmler merely wanted the Jews deported. Heydrich took it a step further.

So here you have three men who were all responsible, whether directly or indirectly, for the brutal deaths of millions.

My museum library has around 8,000 books. I’ve only cleared maybe 250. What else can I possibly find in there?