We are Green Bay Packers fans. That fact is one of the first things people learn about me or my family. Politics and religious beliefs can be overlooked within our clan. It’s where your loyalty lies within the NFL that matters. For example, before Matt and I were married he claimed no loyalty to any team. He isn’t much of a sports guy. But then he joined my family in South Carolina for the holidays while we were still dating and woke up to find his very own Cheesehead under the Christmas tree.

When he and I were planning our trip to Wisconsin, I told him, “There is no way I can be that close to Mecca and not visit!” If you’re a Cheesehead, you understand that Mecca means Lambeau Field. If you’re not a Cheesehead, well…

Matt, Elle, and I headed to Green Bay on Sunday afternoon and checked into our hotel, the Tundra Lodge. It has a waterpark inside! We took a few relaxing trips on the lazy river and spent some time outside in the giant hot tub. Later we decided to go to a local brewery for dinner. 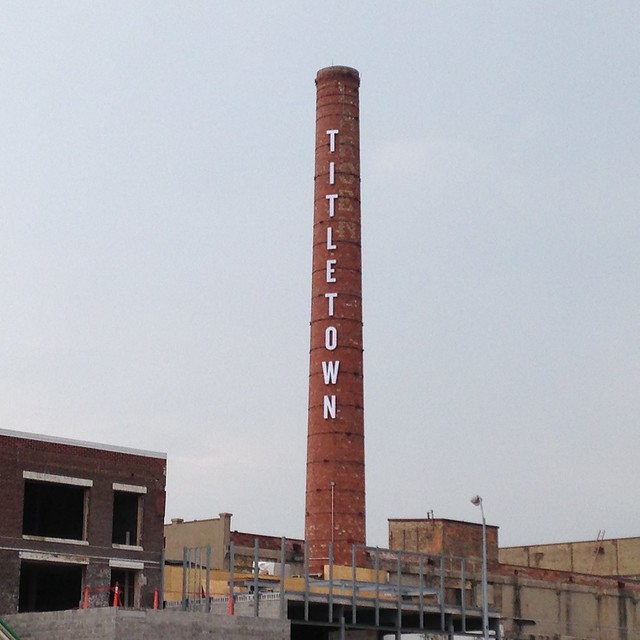 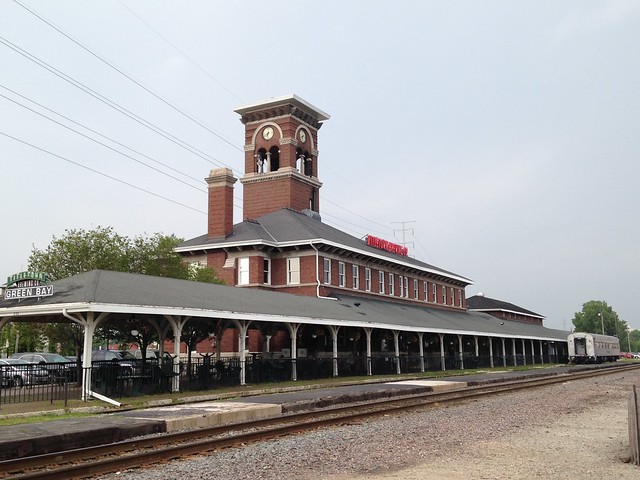 Titletown Brewery is now a brewery and restaurant, but it used to be the Chicago and North Western Train Depot. For forty years the Packers used this station to travel back and forth for away games in Chicago and Milwaukee. It is located next to the Fox River in downtown Green Bay, and across the street is the Neville Public Museum.

If you go there to eat, I highly recommend the cucumber salad. Matt recommends the poutine. They also make their own root beer with an old family recipe. It comes highly recommended by Elle, who I sometimes think is a root beer connoisseur.

Moving on past a horrible night’s sleep (preceded, however, by hours and hours of CABLE TELEVISION!) (which we obviously don’t get at home or I wouldn’t be so excited about it), the three of us checked out of the hotel and went straight to Lambeau Field. With tour tickets in hand, we waited while the family drove up from West Bend then we all had lunch at Curly’s Pub. There was more poutine and even more fried cheese curds and hamburgers with the Packers “G” grilled into the buns. 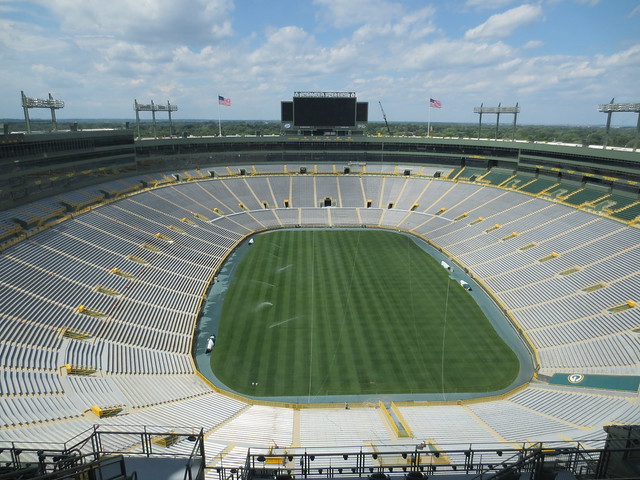 It was so cool to visit this place with my family – my parents from Florida, my aunt and uncle from West Bend, my husband and kiddo from Oklahoma City. I only wish my brothers could’ve been there. I mean, we all saw the world’s biggest G together! Family memories, man. Family memories. 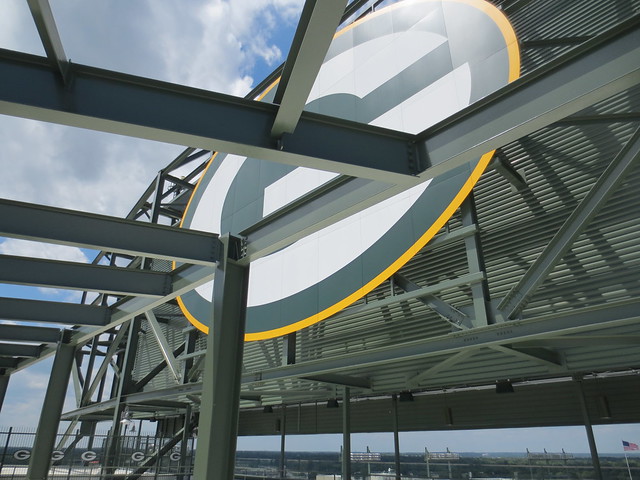 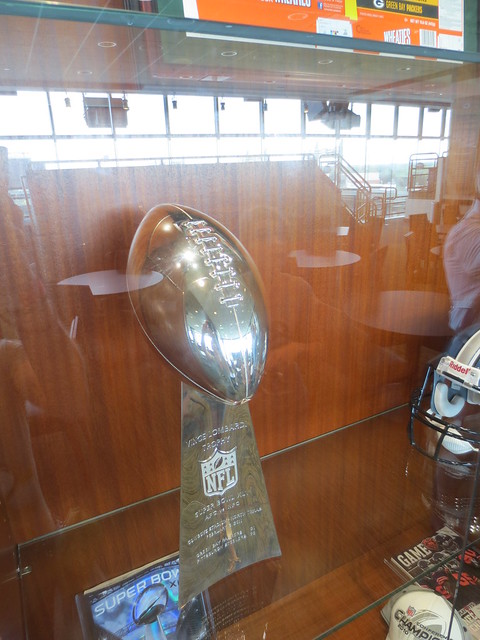 There was so much to take in – over 90 minutes straight of Lambeau history. Our tour guide was just a kid when he sat down on the bleacher seats during the infamous Ice Bowl but he told me that even employees don’t get special perks to attend games.You can add your name to the season tickets waiting list but it’ll be about 14,000 years (yes, fourteen thousand years) before you get called up. 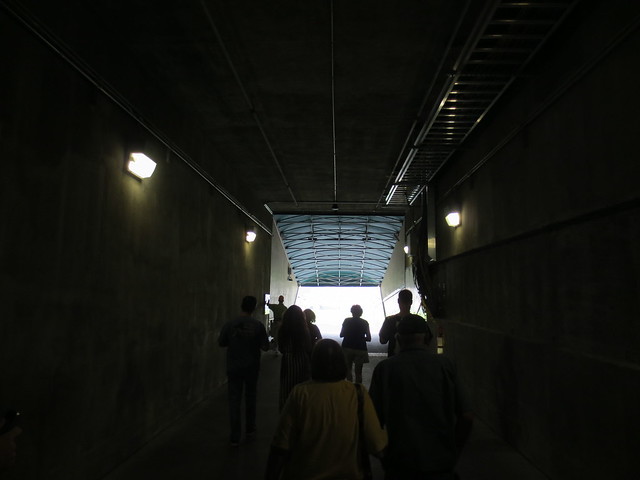 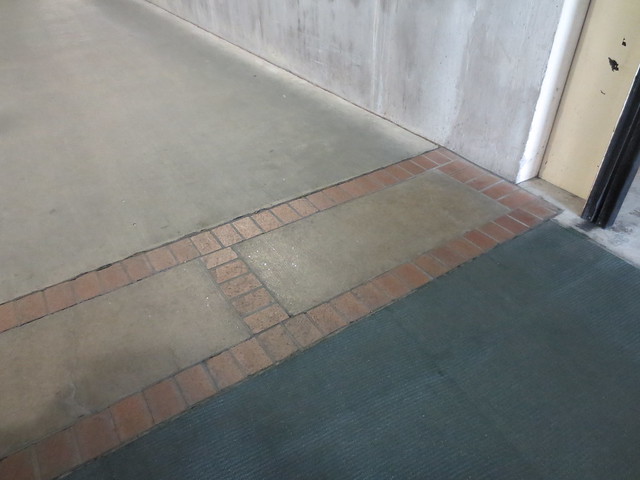 That patch of concrete is a significant part of the Green Bay Packers history. It has been moved from each stadium the Packers have called their home field to finally land here at Lambeau. That means every single Green Bay Packer has run across this exact concrete patch since the team played its first game. 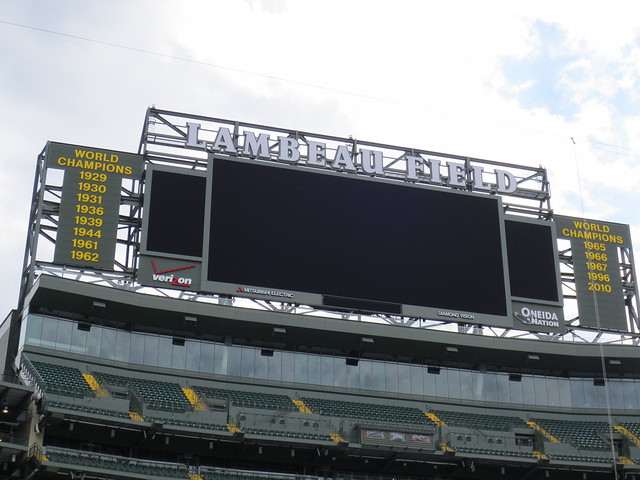 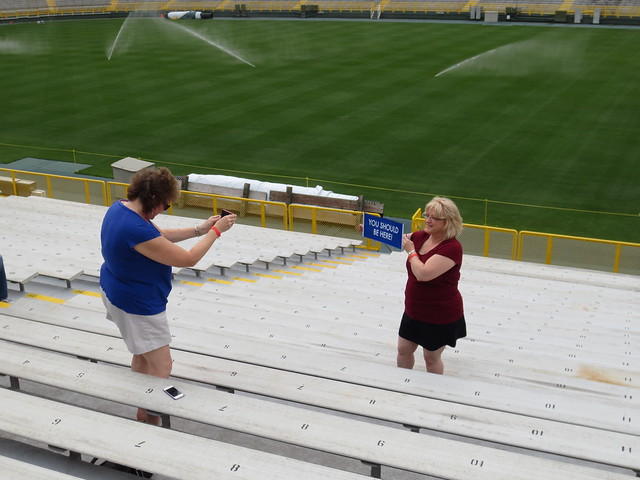 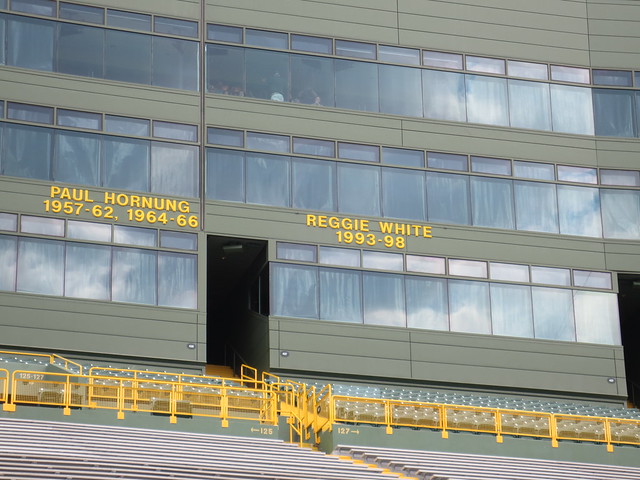 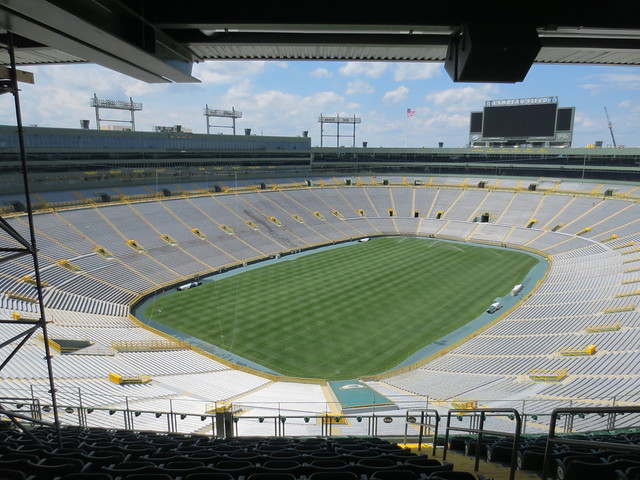 The Brett Favre situation is still discussed, though I think without so many hard feelings. Reggie White is the last Green Bay Packer to retire his number here. Favre is expected to retire his number here, too. In fact, the rumor is he’ll do it before the year is out. And wouldn’t that be a good pair of names to see next to each other again? Reggie White and Brett Favre, together again at Lambeau Field.

Exhausted from walking and from spending so much money in the Pro Shop (Dog collars! Coffee mugs! Children’s books written by Donald Driver!), we all went our separate ways. I said goodbye to my parents that evening and our little family of three packed up for the trip to Chicago the next morning.

3 thoughts on “A Tour of the Midwest: Part Four”