A few months ago I listened to the Laverne & Shirley theme song a ridiculous number of times. That song, and the whole show, really, help keep vivid a memory I have of touring my first brewery in Milwaukee, which was the Pabst Brewery. I was young, too young to enjoy the samples of free beer at the end of the tour, but I remember watching the bottles fly past me on the assembly line. There were high hopes that a glove would stow itself away on the neck of one of those bottles and wave to me as it made its way out into the world, a la Laverne & Shirley.

Everything I just mentioned is important to me for these reasons:

1. The glove on the bottleneck never appeared. Disappointing, but life goes on.
2. The next time I took a brewery tour I was of legal age, but then I was too pregnant to enjoy the free samples of beer at the end.
3. While in Milwaukee this month, we had lunch at Lakefront Brewery but decided to skip the tour. Later in the week, while standing in the atrium of Lambeau Field, a gentleman struck up a conversation with my husband about Lakefront Brewery and mentioned the tour. “Oh, it’s one of the best in the city. They have the whole group sing the theme song from Laverne & Shirley at the end!” OH MY GOD. WHY DID WE NOT TAKE THE TOUR!?!?!?!

So, here. Just because.

We didn’t plan too much of our day around Milwaukee. Matt and I had three goals. Visit the Pabst Brewery gift store. Eat lunch at a brewery. Dip our toes into Lake Michigan (okay, that one was my goal).

The Pabst Brewery was fairly easy to find. I mean, you kind of drive into the area like it’s a subdivision or the town’s historic district, with signs a’blazin’: YOU ARE HERE! 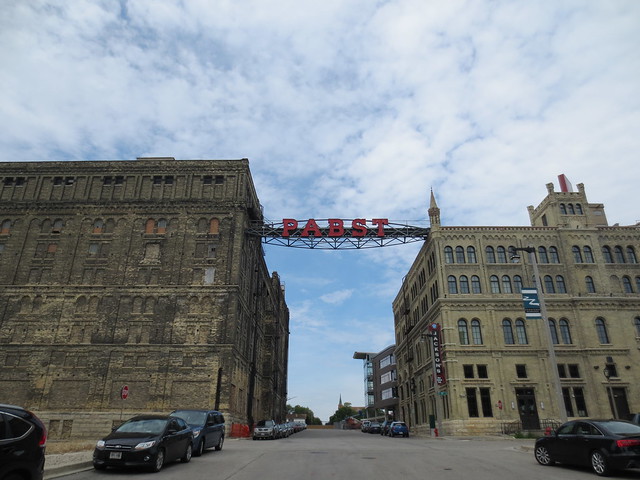 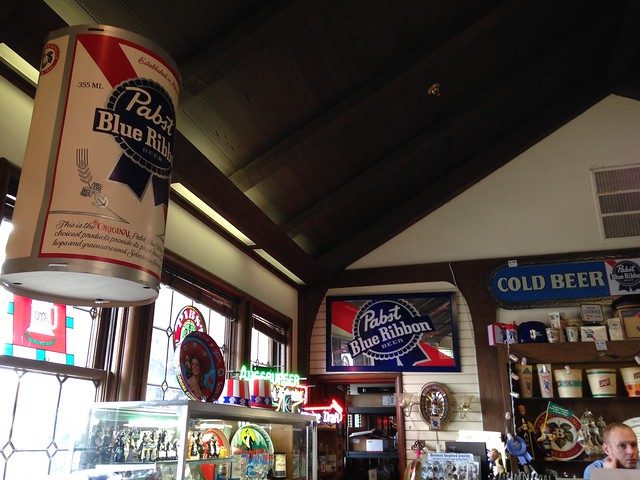 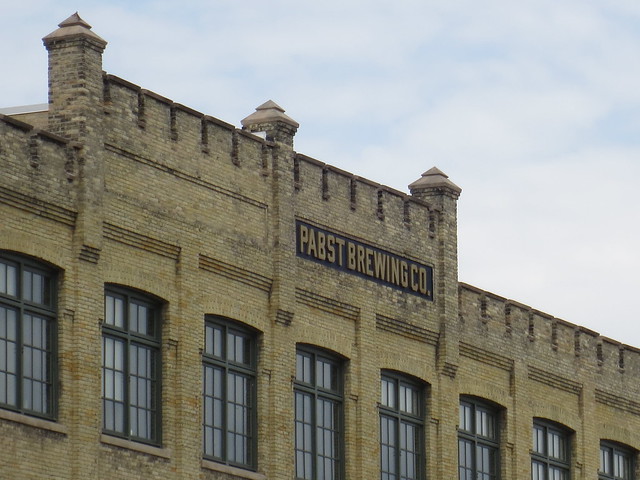 Lakefront Brewery is situated in the middle of a what looks like a condominium farm. A former industrial area? Probably. At least that was my guess after finding the nearby train bridge had been turned into a pedestrian walk-through. And there was thistle, just like here in Oklahoma!

It’s beautiful there. I like how the wild things are very obviously trying to take the area back, and I especially like how the people around here let it. 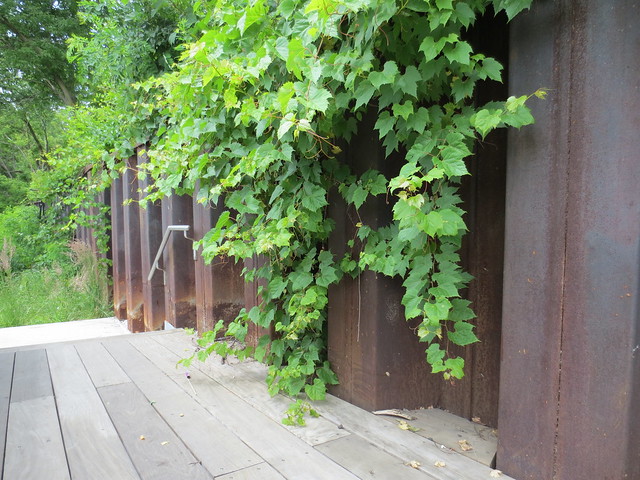 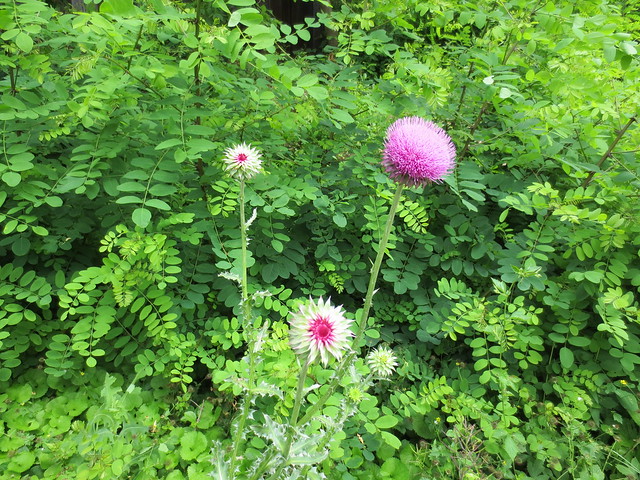 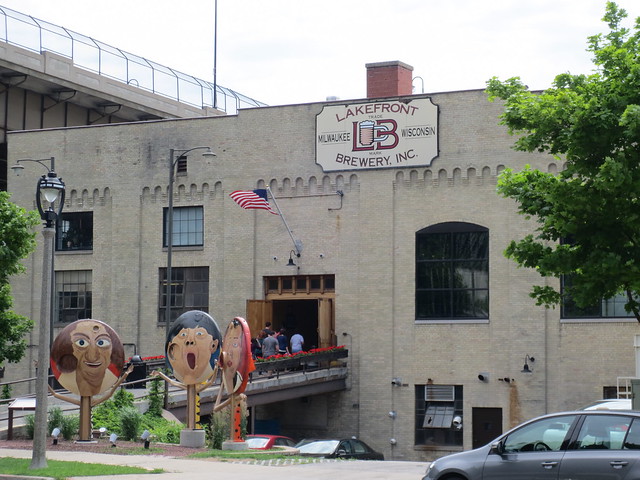 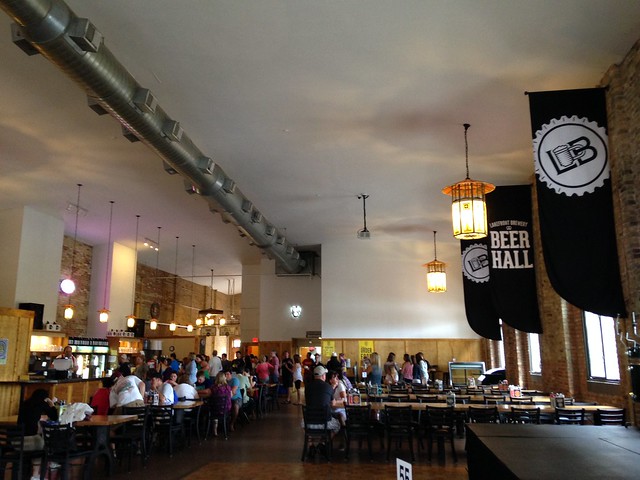 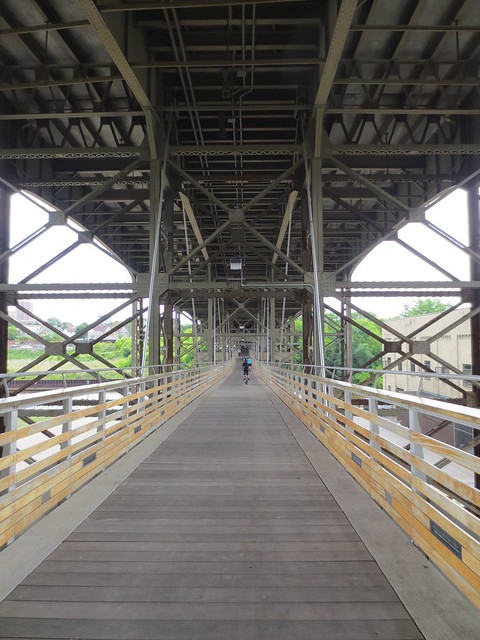 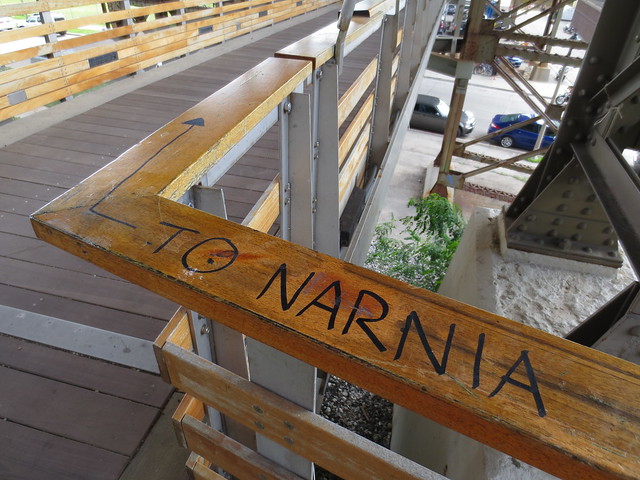 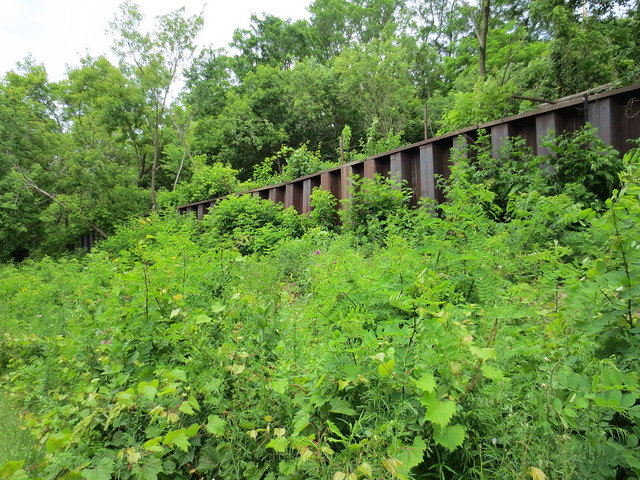 After a lunch of polish sausage on a stick and fried cheese curds, we headed toward Lake Michigan via Brady Street and the rich neighborhoods of the lakeshore. There was a beach volleyball tournament going on which involved a national championship. Naturally this left us with nowhere to park. And here is where we leave Milwaukee.

Forgive me, BUT MY GAWD THIS IS ONE OF THE CUTEST TOWNS I HAVE EVER SEEN! Our timing is impeccable seeing as we Oklahomans rolled into this quaint little town at the exact moment they were testing their tornado sirens. Was it noon? Yep. Was it Saturday? Yep. We know the drill.

The sky was a bit overcast when we got into Port Washington, but the air was not cold (believe me, I’m just as surprised as you are that I didn’t freeze in the 70 degree weather). We spotted a Duluth Trading Company shop at the port. Matt needed pants. I needed a hat with a strap. Elle needed socks. So we shopped.

Just across from this small strip of stores is the harbor and marina. Next door was some kind of fishing derby. And there were two walkways that led visitors to separate lighthouses. We chose the one that warned of slippery rocks, a sign blaring DO NOT ENTER in red (to convey seriousness, always use red), and joined the throngs of other trespassers. It was probably the most dangerous thing I’ve done this century.

Even if I’d fallen in, it would have been worth it (I spotted the lifesaver rings way before I stepped foot on that breakwater – those of us riddled with anxiety are always prepared). The sky even cleared for us. 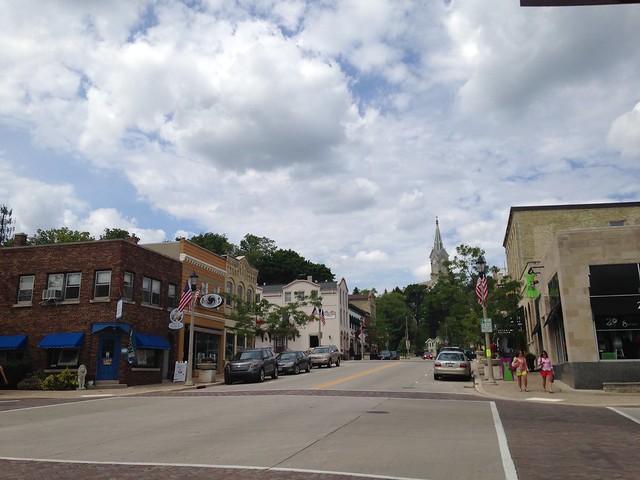 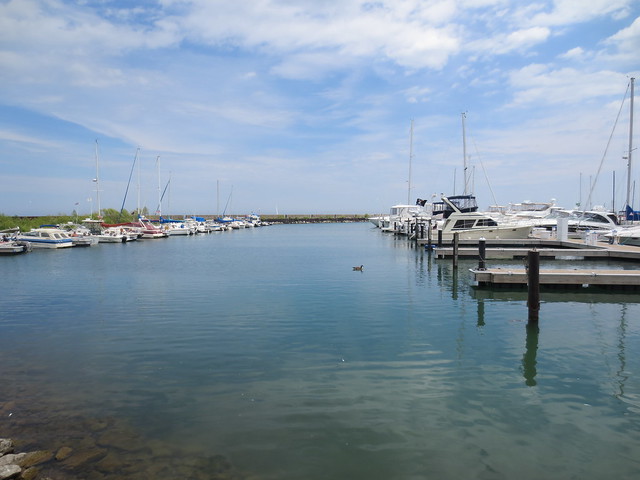 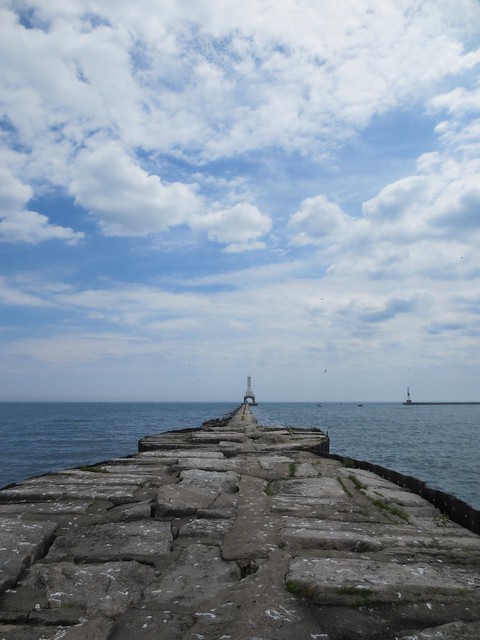 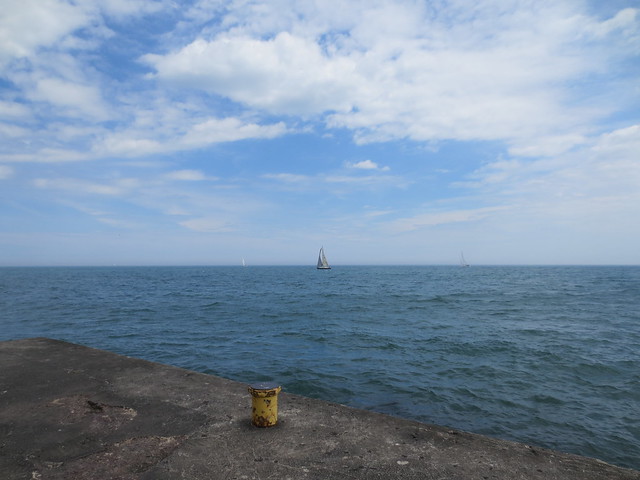 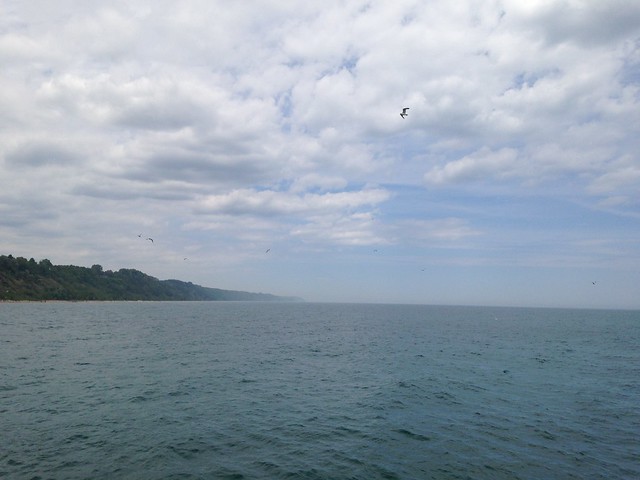 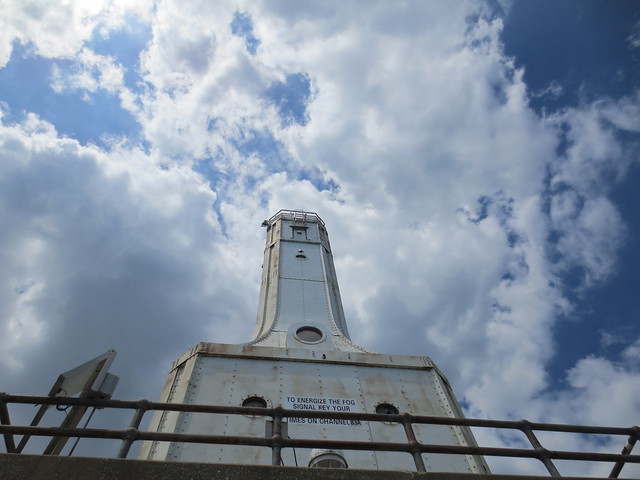 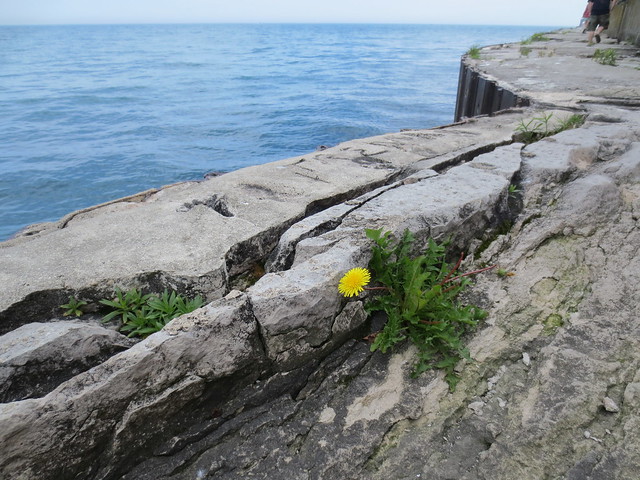 Did I get to dip my toe into Lake Michigan? No. I’m actually okay with this. That water is COLD. This time I chose to stay dry and warm.

Next up: Our family’s pilgrimage to Mecca.