We’ve just returned from a 10-day vacation around parts of the Midwest. It went by too quickly, yet at the same time I was thrilled to pull into our driveway last night, unpack, and crawl into my own bed. Normal life resumes. The 13-hour drive from Chicago treated us much better than the 20-hour drive from North Florida last summer (a torturous haul I wouldn’t recommend to anyone).

During our short stay in Northern Wisconsin, I considered having the family drive a few extra hours north to Upper Michigan where my would-have-been high school reunion was taking place. Late last year I was invited to attend, even though I had moved away from this tiny Michigan town when I was twelve years old. Keeping in mind all the other hours we would be car-bound led me to stay put. A good decision, I think.

How do I recap this vacation? We visited eight cities – some of them were big, most of them were small, and two of them were Springfields. Missouri has the most beautiful roadside wildflowers; Illinois has the most boring landscape. Lake Michigan has cliffs and seaspray and it is breathtaking. And, for just a little while, I felt like I was on top of the world.

So, how do I recap this vacation? Place by place! Or segment by segment, really. The distance between Oklahoma City, Oklahoma and Green Bay, Wisconsin is approximately 976 miles. We made a few stops in between.

We actually spent the first night in Springfield, Missouri, with my in-laws and had breakfast there. We made a spontaneous stop in Springfield, Illinois because of my Abraham Lincoln-mania and had a convenient lunch there. My husband is the one who pointed out our “eating in Springfields” trend that day. Dinner was not in a Springfield, sadly. But hey, IT’S ABRAHAM LINCOLN’S HOUSE, Y’ALL! 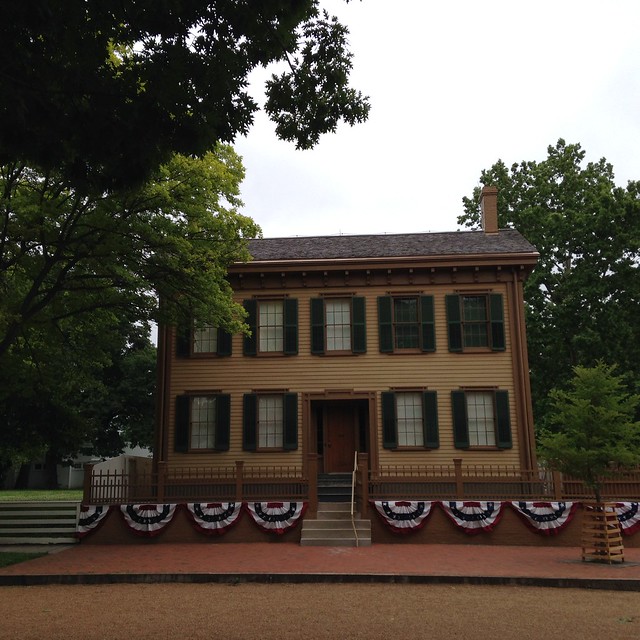 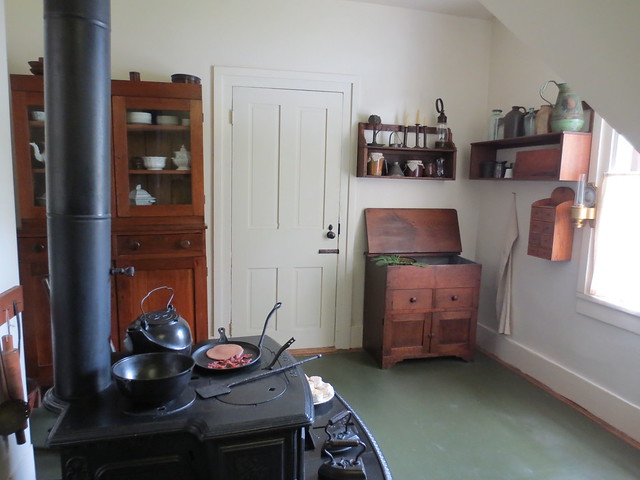 I am starting my master’s degree in American history next month, so what kind of student would I be if I let this opportunity pass me by? We took the tour of Lincoln’s house and learned a lot. Too much for me to retain. What I do remember is this: the top photo is of the renovated house. Lincoln bought the home as a one-story building that had only a few rooms. As his fortune grew, so did his house. The kitchen, pictured above, ended up being a favorite of Mary Todd’s. When Abe was elected and readying the family for a move into the White House, she begged him to allow her to bring this stove. It was top of the line back then. Her husband assured her the White House was adequately equipped with a functioning stove and she finally agreed to drop the subject. 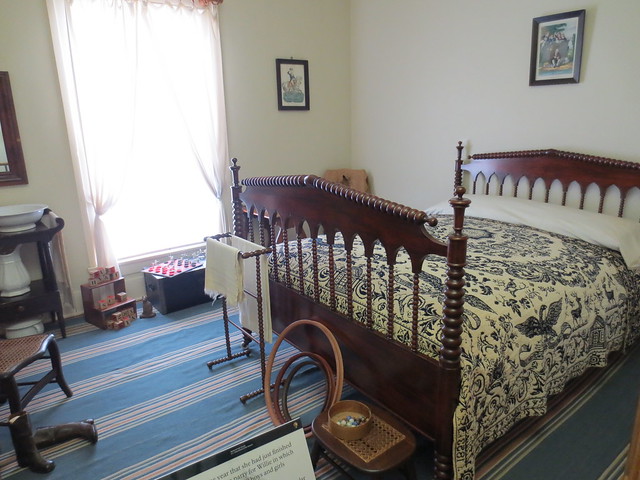 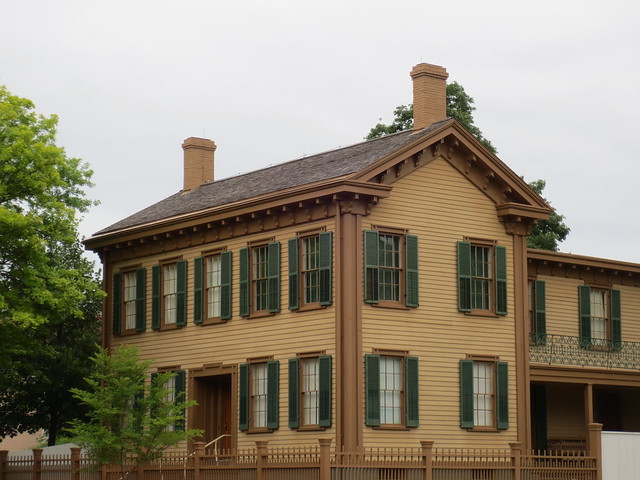 The bedroom featured above belonged to one of the boys, though I never did catch which one. Truthfully, this was my favorite room (besides the nanny’s). It was the only one I can remember that didn’t feature gaudy wallpaper and a blindingly hideous curtain fabric (again, besides the nanny’s). I’m not knowledgeable enough in historic preservation to decide if that’s the fault of the Lincolns or historical interpreters. The photograph of the house is purely for tourist purposes: it is the most popular angle from which to capture a shot.

This photo featured below was a happy accident that led me to find my own personal connection to Lincoln. The reason for this trip to Wisconsin was to visit with my mother’s side of the family, half of whom are Hamlins. And yes, it turns out they are related to Hannibal Hamlin, Lincoln’s VP. HISTORY NERD SCORE! Another Hamlin-esque note of interest: Hannibal Hamlin’s son, Charles, was at the Ford’s Theater the night Lincoln was assassinated. When you think about how many presidential assassinations Lincoln’s son, Robert, witnessed, it makes you wonder how much smaller the political world was back then. Or is that just me? 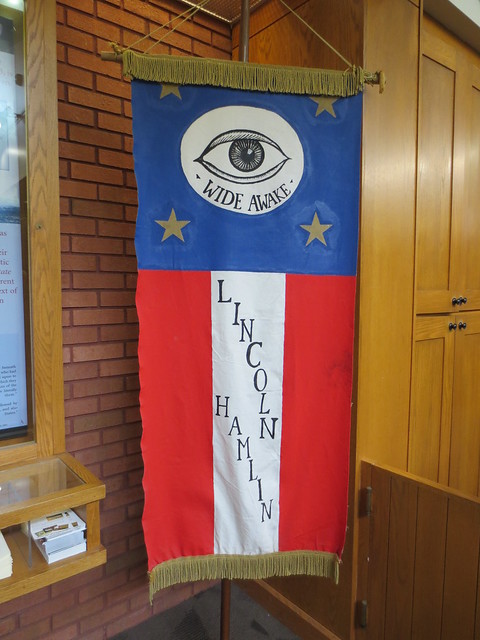 I take full responsibility for this slip-up. Here’s the thing: my daughter’s nickname is Ella and I have known for years about Ella’s Deli in Madison. I’ve been instructed, for my daughter’s sake, to visit Ella’s Deli one day. So the family agreed to drive nearly 90 minutes off our travel route to have dinner at Ella’s Deli. How could we not? WE WERE SO CLOSE! And be sure to try the noodle kugel!!! (whatever the hell that is) 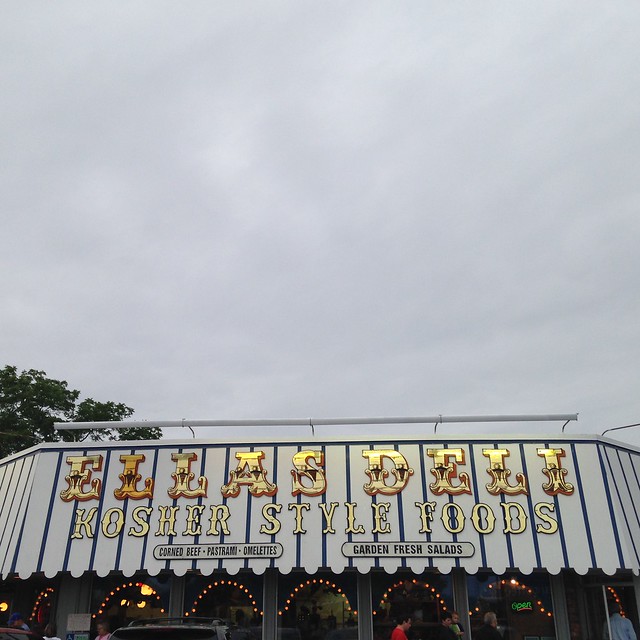 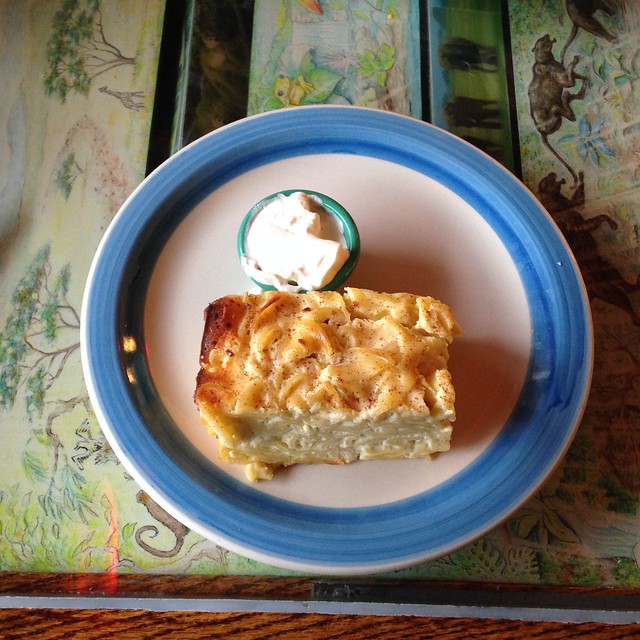 I’m still trying to process this experience. It was an alarming super-sensory adventure. The menu itself is 20 pages long, often featuring the same dish multiple times but it SO MANY DIFFERENT FONTS AND COLORS!!!!!!!!! There were trains making the rounds near the ceiling and mechanical toys flying above our heads. Near our table was an Elvis the Pelvis who sprung out of the wall like a cuckoo bird. Above my husband was a pantiless Betty Boop doll (who’d seen better days) swinging lazily on a swing. It was some creepy, overwhelming shit.

We watched more than one kid lick the windows all while a little girl sitting behind me coughed and sniffled daintily just inches from my hair. It was disturbing to realize the dried…er, stuff (?) on the menu might not be food at all and was probably months-old kid boogers. Ella, my Ella, hilariously declared that she would wait out the next 72 hours to see if she’d caught a virus. The whole family was concerned. (Note: WE ARE FINE! Our next virus watch wouldn’t hit us again until I accidentally stuck my finger in my mouth after touching a Chicago subway rail. Ewww.) Check out the website and decide for yourself, unless your eyes explode from this visual circus, if you’d like to visit one day. Don’t forget the Excedrin.

As for the noodle kugel – I still don’t know what the hell it is, but up there is a picture of it. It wasn’t necessarily awful, instead I found it to be surprisingly edible. Imagine your mom’s creamy homemade macaroni and cheese, baked to a tender crisp on top, and sprinkled with…cinnamon? And dipped in sour cream? I ate it because I was hungry but I don’t ever want to eat it again, that’s for sure.

(I took the hit for making my family suffer through Ella’s Deli but things evened out later during our trip when my husband suggested we take the L train in Chicago to some brewery restaurant that didn’t exist and had us walking around for blocks in the industrial part of the city.)

One thought on “A Tour of the Midwest: Part One”