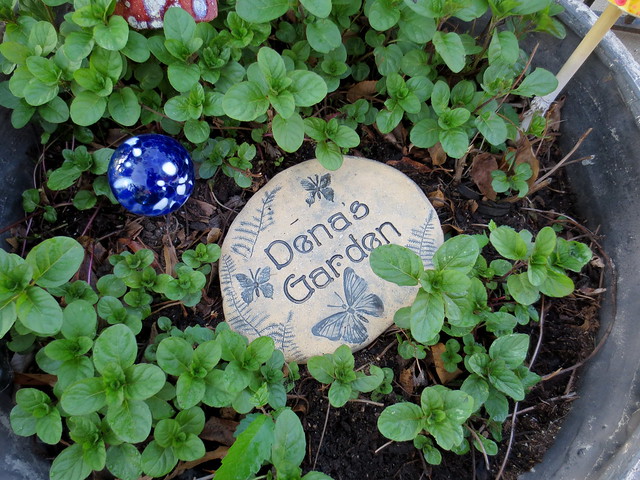 The weather has been consistently inconsistent which, I’m learning, is quite normal. This week we are expecting temps in the 80s and lots of rain, only to be followed by a few days in the 40s. Isolated tornadoes have been predicted for the weekend. I’ll still take this over that agonizing perpetual winter we’ve all endured.

This past weekend we went plant shopping and I was on the lookout for black petunias. I first saw them in a locally owned nursery in Jacksonville, Florida, in 2012. Unfortunately, that’s also the last time I saw them. Yes, I know I could simply order seeds and grow my own black petunias, but I haven’t quite felt that desperate for them yet.

The rains over the last week (and, of course, my daily sprinkler watering) have really helped my garden – except for the tomatoes. They drowned. The squash is still going crazy, as are the peas. I’m pretty optimistic about my hollyhock (which is black!), my jewel nasturtium, all the zinnias, and almost everything else I sowed and transplanted.

My only iffy plants are the poppies. The more I learn about poppies, the more I realize they’re kind of finicky, which I find a bit strange. Don’t these things practically grow on the side of the highway in some places? They’ll be my biggest surprise. 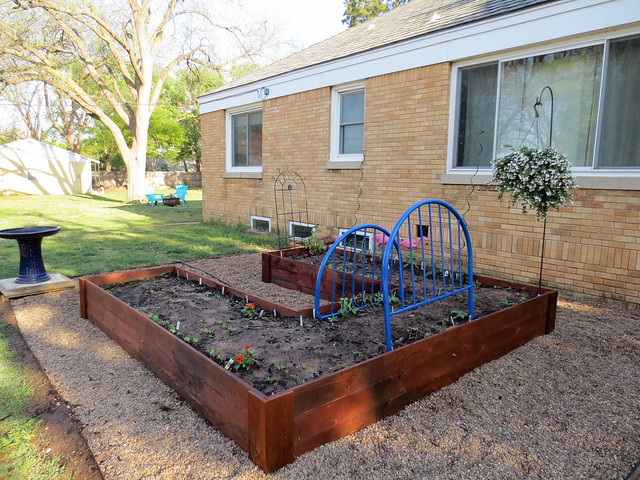 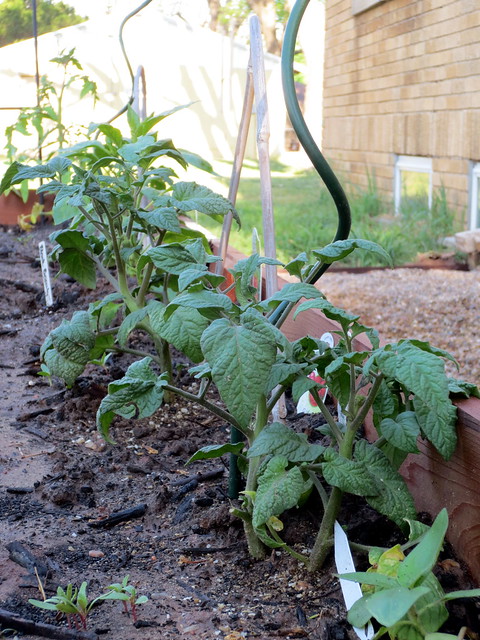 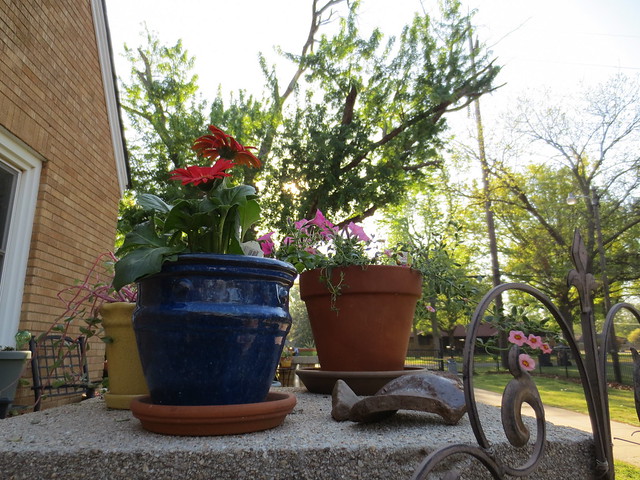 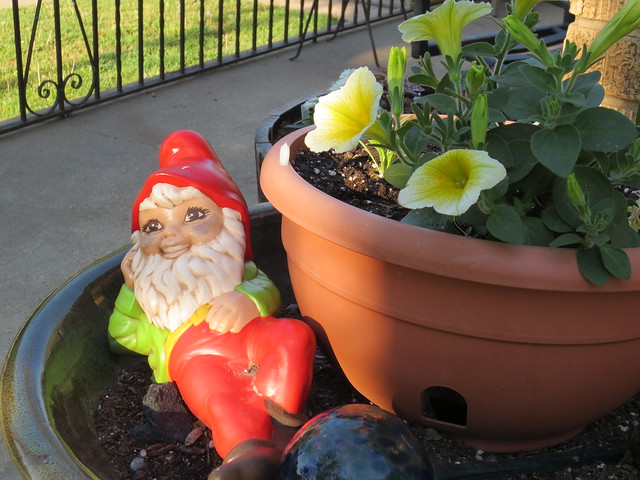 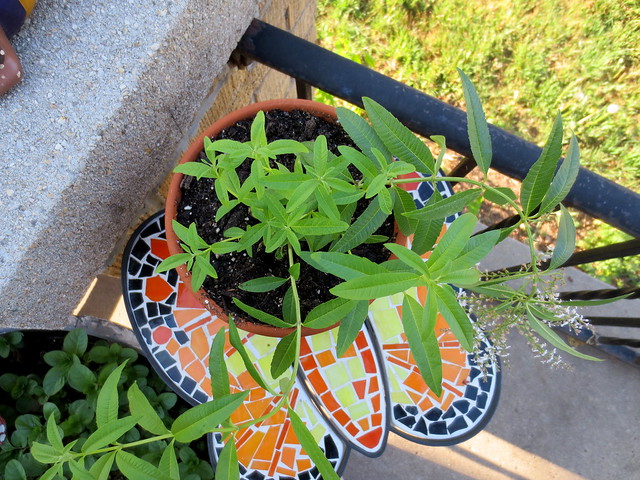 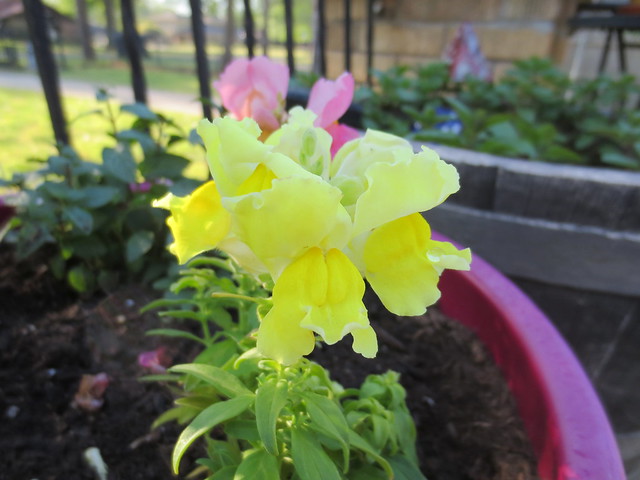 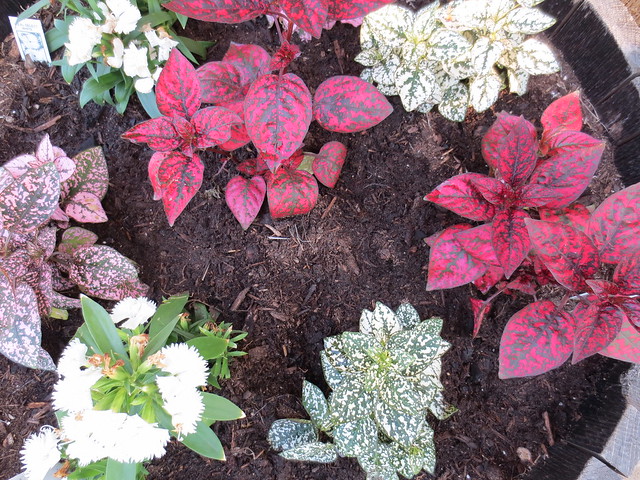 All of these join the survivors from last year, which number in the very few. The kalanchoe and purslane actually held up indoors with the south-facing sun shining on them daily. The Veronica speedwell is making a strong comeback, too, just like my lime mint. And that Norfolk pine tree that helped me get through the last days of 2013’s winter? I can’t even look at it. It’s so ugly and pathetic and screaming to be put out of its misery.

Next up on the agenda are the mammoth sunflowers, repotting that sad, ugly Norfolk pine (per the experts’ instructions), and deciding what to put inside my two remaining pots. Angelonia? Plumbago? Milkweed? So many decisions.

I’m so thrilled to report that my porch has been returned to its usual warm-weather glory. It is again worthy of porchsittin’. Just last night I got to enjoy it in full for the first time this year. With a glass of wine and a book – my current read is The Giver – I sat in the sunshine and took in the fresh air.

Meanwhile, drivers sped down my street at dangerously unsafe speeds and yelled into their cell phones with their windows open. The bicyclists sent Teddy into a frenzy. Chimay ate her own poop. The cats next door and the wolves behind us all howled, for various reasons. The birds nesting in the eaves of our house continue to pull each other around by their faces. They’re such jerks.

Yes, porchsittin’ is my favorite.

4 thoughts on “Notes from the garden”