The title of this post should really be “Wanna know how lazy I am?”.

In the fall of 2012, my pecan tree dropped a boatload of nuts. I crabwalked for hours one afternoon to pick up as many pecans  as possible. My mother and I had worked out a trade: She would send me tangerines and valencia oranges from her citrus trees in North Florida in exchange for my pecans. I ended up shipping about three gallon-sized bags to her. The rest of the pecans I picked up that season remained in a basket, waiting for me to shell them and bake a few pies.

But that’s not what makes me lazy.

What makes me lazy is that the basket of pecans is still out there, a year and a half later, just sitting on the back porch. The pecans are spoiled – they have been for quite some time – so there has been absolutely no use in keeping them around.

The other day, however, I noticed some twigs and dry brush inside the pecan basket. Upon further inspection I discovered that it’s a bird’s nest! WITH BABIES! Or soon to be babies… 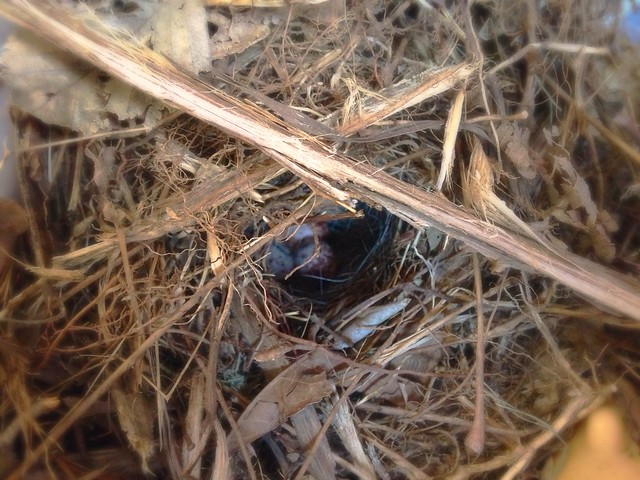 I am clueless when it comes to identifying these pesky house birds, but my best guess (after very little research – again, lazy) tells me that these are the eggs of a house sparrow. Starlings and house sparrows continue to show up as very different birds when I turn to the Google gods for answers, I always thought they were the same thing. The descriptions of the eggs, though, tells me I’m wrong.

Schnitzel, our little foster fledgling from last year, was a starling. So was Mr. Grumpyfeathers. I have no experience with sparrows. We’ve always assumed those two starlings fell out of their nests, which were precariously located inside the sloping eaves of our front porch. These little sparrow babies already have a leg up in the world since they’re getting their start in life inside a basket. If we happen to find any of them flopping around on our back steps, we’ll know for certain their mama tossed them out.

I don’t put it past these birds to work that hard, either. They can be quite vicious. Have you ever watched an adult bird drag another adult bird from its nest…by its face?!